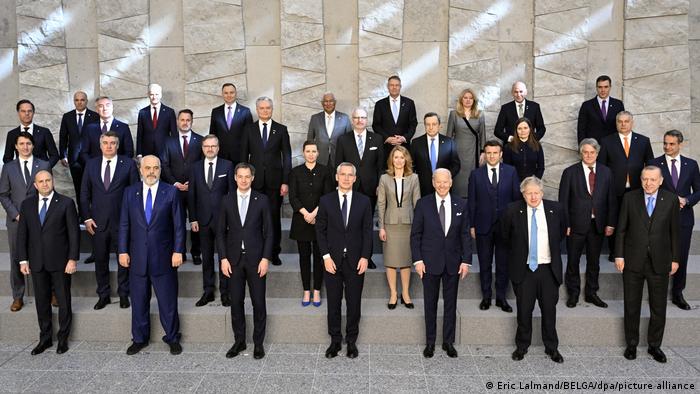 The leaders of more than 40 European countries are having talks in Prague, at a historic first meeting of a new political forum of nations.

As he arrived, France’s Emmanuel Macron spoke of building a “common strategy” in response to Russia’s war in Ukraine.

Germany’s chancellor said the gathering was a great innovation.

The summit, billed as a European Political Community beyond the EU, has been championed by Emmanuel Macron, who told reporters on Thursday it sent a “message of unity”. But there is skepticism, even within the EU, about the new forum.

Ahead of the meeting, Ms Truss made clear it was “not an EU construct or an EU alternative”.

She later told broadcasters the meeting was “not about moving closer to Europe” but “about working with Europe on issues that we both face”.

Nevertheless, her decision to take part could mark a new phase in the UK’s post-Brexit relations with Europe.

The leaders were discussing energy, migration and security, with a particular focus on the war in Ukraine. Officials said Ms Truss spoke of the need for stronger, more resilient economies and energy supplies, while stressing the need for freedom to succeed.

Ukraine’s president told the summit: “You and I are now in a strong position to direct all the possible might of Europe to end the war and guarantee long-term peace for Ukraine, for Europe, for the world.”

EU foreign policy Chief Josep Borrell said in a blog that in the wake of Russia’s invasion, there was a need to “rethink and reform the wider European order, beyond the work of the EU and Nato”, but he added that the summit would be no more than an initial exchange.

As well as the UK, non-EU members Switzerland, Turkey, Norway, Iceland, Georgia, Azerbaijan and western Balkan countries are among those taking part in the first gathering of the EPC.

What is this new community?
Critics see it as a vague regurgitation of old ideas and its exact role has yet to be made clear.

When he proposed the idea this year, President Macron said it would “offer a platform for political co-ordination” for countries, both those in the EU and those not.

Russia’s invasion of Ukraine gave new impetus for co-operation among nations beyond the EU’s 27 member states.

But the new EPC has no institutions or dedicated staff. That has led to questions about how any decisions would be implemented.

So it’s an unprecedented effort to bring leaders together from across the continent to discuss areas of shared interest. If it proves to be a success, it may continue to take place up to twice a year. If it’s a failure, it could fizzle out.

Ms Truss had been hostile to the EPC project, so what changed?

Some observers point out it was never likely she would voice passionate enthusiasm for a French-led European meet-up while vying for the Tory leadership.

But once in power, she appeared to warm to the idea, although Downing Street is reluctant to accept suggestions that Mr Macron won her over.

During the Conservative leadership race, Ms Truss declined to say whether Mr Macron was a “friend or foe”.

However, asked the question again in Prague, she told broadcasters: “He is a friend.”

“We’re both very clear the foe is Vladimir Putin,” she added.

It might prove to be a “modest” turning point in EU-UK relations, says the director of the Centre for European Reform, Charles Grant.

While a row about post-Brexit arrangements for Northern Ireland remains unresolved, talks are restarting this week.

“Neither side is trying to push that issue to the brink at the moment,” says Mr Grant. “So this summit could be a sign of a modest rapprochement.”

The official line was that the PM was taking part because she wanted to “shore up” support for Ukraine and “galvanize” collective action on energy security and migration.

Another draw for the UK was the presence of Turkey’s Recep Tayyip Erdogan, as well as the participation of Norway, a key supplier of energy to the UK.

The UK has been less keen to talk about security, with jitters that the EPC could be seen as somehow cutting across the Nato military alliance.

If the EPC does prove short on solid outcomes, then expect it to be long on messages about support for Ukraine and condemnation of the Kremlin.
But not all those attending are of one mind on the conflict.

“One of the measures of success will be, does it persuade Serbia, Azerbaijan and Turkey to lean a bit more to the West and less towards Russia?” says Mr Grant.

Turkey has talked of a “balanced” approach to Russia and has not signed up to Western sanctions.

Uncertain identity
A sign of the uncertainty about what the EPC is really for is that there have been far clearer messages about what it is not.

It’s not a substitute for Nato or the G7, we’re told. It’s not a slightly comfier “waiting room” for countries eager to join the EU. Nor it is a forum that will be dominated by EU institutions.

That’s despite invites having been issued by the president of the European Council, Charles Michel, while the meeting itself has been tacked on to the front of an EU summit.

Brussels insists it has merely been facilitating the forum – it’s not “the EU plus”, insisted one senior official.

The next EPC, in either six months or a year’s time, is expected to be held in Moldova.

If the project survives, the UK is currently fourth in line to host a summit. But British officials are keen to play it cool on the EPC, insisting they will walk away if it evolves in an undesirable direction.
(BBC)