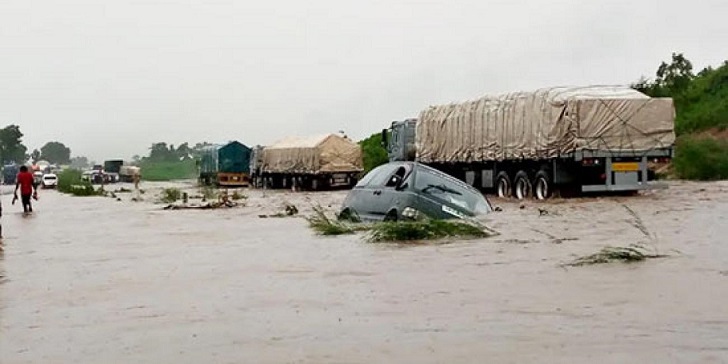 A Driver, (name withheld) drove into the flood water on Lokoja-Abuja Highway in a desperate attempt to wade through the overflowing water on the highway, along Lokoja-Abuja federal highway.

But minutes after, he screamed for help as an unknown reptile inside the flood water bit or stung him in the leg, and his body swelled up in a mystery everyone around made a guess about the kind of reptile or insect, as the case may be.

His co-travelers and volunteers offered help but without medical attention readily available while he wailed in pain, squirming on the ground.

No one really knew the kind of insect or reptile that bit him in the leg as the flood water harbor different kinds of reptiles like snakes and even crocodiles, spotted by some travelers on a boat ride from Lokoja to Koton-Karfe town, where the travelers board the commercial vehicles to Abuja and other destinations, in northern Nigeria.

Dr. S. D. Musa, a professor of environmental geography, at Prince Abubakar Audu University, at Anyigba, East of Lokoja, capital of Kogi state, advises travelers to wade through the flood water with care because in his words, “the floods come with serious threats to the environment, and more of such incidents may be recorded in addition to the after-effects of the floods.”

With the various aquatic lives and dangerous reptiles under flood waters being experienced on the flooded highways, cautionary movement in flood water is the key word of safety to travelers, rescue workers, child swimmers, canoe rowers, and others involved in flood rescue operations across Nigeria.

However, a group from Ibaji local government area, the worst flood affected local government area in the state, Ibaji unity forum, says people of the area are in urgent need of relief from governments at all levels, given the magnitude of the destructions to homes and livelihoods as the flood disaster wreaked havoc to the farming Island of Ibaji, where communities live on the shores of the Island and the area is known in the state as a community, surrounded by water.

Chairman of Ibaji local government area, Mr. William Iko-Ojo, had announced the death of four persons including a baby, killed by the flood in the area while appealing for more donations from spirited individuals and organizations in Nigeria.

Deputy national publicity Secretary of the ruling All Progressives Congress APC, Murtala Mohammed, had donated ten million Naira in aid of victims of floods in the area.

This incident, according to the stranded travelers, underscores the need for the provision of medical emergencies, within and around the crossing point, for the period of the flooding, expected to last till sometime in early November, when the flood water hopefully recedes.