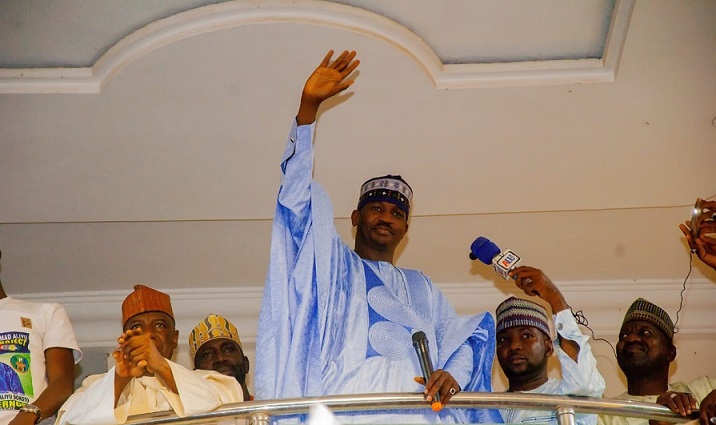 Sokoto State APC Gubernatorial candidate, Alhaji Ahmad Aliyu Sokoto has called on the Independent National Electoral Commission (INEC) and security operatives in the state to allow election game-play for itself without undue interferences.

He spoke on Monday at his residence in Sokoto when he received hundreds of members of the Sokoto Amalgamated Traders union who paid him a solidarity visit as governorship candidate in the forthcoming 2023 elections.

The APC Gubernatorial candidate further explained that, if really all are allowed to go as it is in the Electoral Act, he is optimistic that APC would emerge victorious in the state.

He expressed satisfaction with the multitude of people seen that marched for the solidarity visit, explaining that, if given the mandate and elected as Governor of the state he would ensure the welfare of Sokoto state traders.

He said as it’s now, the  PDP-led government in the state has failed in boosting all business activities, creating youth empowerment, improving agricultural development, enhancing educational development, and uplifting the welfare of the state civil service, among many other sectors in the state.

Aliyu also said all the sectors have been grounded and pledged to reinvigorate them for proper human capital development.

He described the procession of about eighty associations as colorful and an indication of success for APC.

He pledged to follow in the footsteps of the former Governor of Sokoto state, Sen. Aliyu Magatakarda Wamakko towards ensuring the provision of social amenities and infrastructural development in the state.

Spokesperson of the associations, Alhaji Bello  Mai Jama’a intimated to the APC Governorship candidate that the procession was done just as a mark of respect and to felicitate the leadership of the party and to express their support to him as APC Gubernatorial candidate of the state.

“We are ready to mobilize more supporters in the state to secure victory for APC at all levels.”

They all recalled the giant strides of the former Governor of the state, Sen.Aliyu Magatakarda Wamakko during his stewardship where business activities in the state were accorded top priority.

They made a strong commitment in ensuring their unflinching support to all APC candidates towards ensuring the party’s victory come 2023 polls in Sokoto state.

The APC Vice Chairman, Sokoto central, and business mogul in the state, Alhaji Yahaya Buhari Siriddawa while thanking all those who attended the rally assured of their continued support for the candidature of Alhaji Ahmad Aliyu Sokoto as the Governorship candidate in the state.

The amalgamated traders’ unions that took part in the processions were those of vegetables, orange, tubers, butchers, GSM, blacksmiths, grinders, and poultry sellers, among many others.

The successful procession covered about eleven kilometers of road walk from the APC secretariat, Sultan Abubakar Road to the residence of APC candidate, Hon. Ahmad Aliyu Sokoto at Junaidu Road.