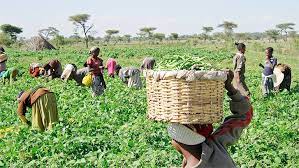 Nigeria’s agricultural sector is performing well and is capable of providing employment for the teeming youths and boosting the nation’s economy, if well harnessed.

Abdullahi said that one of the reasons why food prices had been on the increase was because the value of our currency is low, which he said has now encouraged the smuggling of agricultural produce to neighboring countries.

According to him, Nigeria has 62 percent of the population of West African countries and most of the food is produced in Nigeria because of the climate.

“It is only in Nigeria that you have all the climatic conditions suitable for agriculture.

“So, we have the potential to produce and we are producing. Most of the crops we are producing are feeding West African countries and it normally finds its way through smuggling and whatever.

“If they take that food from us to the Niger Republic, the price they will pay per bag is twice the amount using naira. For example, a N20,000 bag of Maize here is about N40,000 there, just because the value of our currency is too low.

“The farmers are not complaining, it is the civil servants and others who are complaining about the hike in food prices because we are buying food.

“So, we should try to take advantage because it is an opportunity for youths to go into farming,” he said.

The Technical Adviser noted that the only drawback was the high cost of inputs, which the government needs to look into.

“Government needs to subsidize the high cost of fertilizers, provide seeds and provide some of the agricultural machinery, then many people will embrace farming and we can produce food abundantly.

“Nigerians can embrace backyard farming and produce their own food to feed their families,” Abdullahi added.

He said the population of Nigeria 62 years ago was not the same as what is obtained now.

“The agricultural sector is trying and the production is increasing with the expansion of land areas. The yield is also improving, but very small.

“More importantly, we need a lot of government policies to encourage production.

“If you go to Sudan, you will see a lot of greenhouses; we can make policies to do the same here. The greenhouse can sustain a family.

“But, we need to empower them to get those facilities,” the technical adviser said.

On the exportation of agricultural produce, Abdullahi said the rejected crops were a result of the handling of the crops, using chemicals by the middlemen, the chemicals for storage, and this involves certain crops.

“Our crops are being rejected not because farmers are using chemicals during the production, it was during storage.

“If you look at the number of chemicals we are using per hectare, we are even under-applying chemicals in Nigeria.

“Like Sesame seeds in Nigeria, though, farmers are using fertilizers and chemicals, it is still being regarded as organic because they use very little per hectare.

“So, the issue of rejection is not at the farmer’s level, but at the middlemen’s level,” he said.

Abdullahi added that one of the new mandates from the Federal Ministry of Agriculture and Rural Development is all year-round agriculture, hence, the development of heat-tolerant varieties.

“But, to be able to produce crops all year-round, we have to develop our irrigation facilities because we have a rainy season and dry season.

“The research institutes are working in this regard,” he said.

In his contributions, Attanda said that Nigeria has been feeding its population and the closure of borders was a testament to that fact; but, the question is why it has yet to reflect in the national economy.

According to him, the chunks of farmers are in the informal sector.

“So, to make the prices of food cheaper, those chunks of farmers that are in the informal sector must be mainstreamed into a formal sector.

“Government will have to make policies regarding that. If 85 percent of the farmer’s population is put into a formal setting, it is going to enhance our foreign earnings.

“This is because most of our foods leave the Nigerian border. When you go to America, they will tell you about Ghana yam; is Ghana producing Yam like Nigeria?

“Go to Mile Two now in Lagos, you will see more than 80 to 120 trucks load of yam on their way to Ghana.

“And, when it gets to Ghana, they just repackaged it and send it to America and Europe. So, if large farmers are mainstreamed into formal settings in that they have bank accounts and can be captured, you will see a difference in our economic growth.

“The issue of unemployment they say is high in Nigeria, I don’t agree with it.

“The agricultural sector absorbed a lot of manpower. But, I think when we talk about the rate of unemployment sometimes, it is about white-collar jobs,” he said.

On the dearth of agricultural extension agents in the country, Chief Executive Officer said the country has a high number of graduates from Agricultural Economics and Extension yearly, but what was missing is the knowledge transfer ability, which is being threatened by a lack of facilities and insecurity.

“If they ask people to go to some parts of Nigeria, they might not be able to go, another thing is the access roads, which the Federal Government is really working on.

“If we have accessible roads, to transfer knowledge and carry extension workers to that place would not be a problem. So, provision of infrastructure is key,” he said.

Attanda noted that creating access roads that would lead to all the experimental plots has been one of his priorities on the assumption of duty.

He said that he was planning to form a collaboration with the Oyo State Government to achieve that objective.