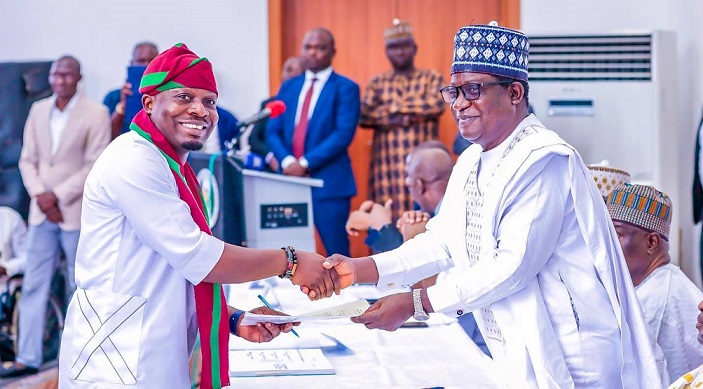 Governor Simon Bako Lalong of Plateau State has sworn in 7 new Commissioners to replace those who resigned from his cabinet to pursue their political careers.

Dr. Makut Simon Macham, Lalongs spokesperson in a statement on Tuesday said the governor who congratulated the new appointees revealed that they were recognized and identified to serve the people of Plateau State because of their personal achievements, records of service, as well as support to the APC-led Rescue Administration over the years.

In the cabinet reshuffle, Hon. Victor Lapan moves from Youth and Sports to Works while Hon. Gyang Musa moves from Science and Technology to Special Duties and Inter-Governmental Affairs. Hon. Dan Hirkop moves from Higher Education to Budget and Planning, while all others retain their portfolios.

“You are coming on board at the twilight of this administration when we have just about 8 months to complete our mandate.

“Indeed, you are coming into office at the time that is most crucial as we tidy up our projects and programs to complete the fulfillment of our campaign promises.

“This means that you have to hit the ground running and catch up fast to enable you effectively deliver. “While we are continuing with ongoing projects and carrying out new initiatives, the largest attention of the Government at this time is devoted towards completion of projects which will be commissioned in the coming months.

“Already, we have many of them that are fully completed and others almost completed in various sectors ready for commissioning. I expect that you will liaise with the bureaucrats in your MDAs to ensure that you get acquainted with the progress so far, the governor said.

He charged the new Commissioners and most especially the old ones to do more in propagating the achievements of the administration through the media as well as community and social platforms.

Lalong said he has observed with dissatisfaction that those in charge of MDAs are not doing much in talking about the laudable programs and projects of Government within their areas of jurisdiction.

“Some do not even defend the Government’s records in the face of desperate propaganda and attacks by the opposition to deceive the public that the APC Government has not done anything.

“This must change from now henceforth as we are facing elections where our records should give us an advantage during the campaigns.

“I shall be monitoring the propagation of our achievements by the MDAs more closely and also ascertain the passion, loyalty, or commitment of each appointee to this administration.

“We have so many achievements to talk about and put the records straight about the successes of our Rescue Administration and indeed that of the APC at the Federal level.

“Because we are on the verge of another general election, your performance will impact the fortunes of the Government and the ruling party in the elections. I expect that you will give your best within this short time to prove the point that you were not appointed out of mere sentiments but because you have a lot of value to bring to the table.

“Let me reiterate that you were all chosen based on merit and on the strength of your records of selfless service and passion to improve the lives of the people”.

The Governor who used the opportunity to thank the former Commissioners who served diligently and gave their best towards the implementation of the vision and policies of the Rescue Administration said he did not sack anyone as all of them resigned voluntarily with some of them deciding to join the APC campaigns for the 2023 General elections.

He also warned them about working against the interest of the APC and the people of the State.

“You should remember that you have been brought into Government at such a crucial time to serve and not be served. This appointment is not a promotion to self-aggrandizement or a window for corruption, mismanagement, or waste of public resources.

“Anyone found to be working against the public interest or at cross purposes with the mandate and vision of the Rescue Administration will be shown the way out. You must project our party the APC at all levels as anything short of that will not be accepted”.

Responding on behalf of those sworn in, Commissioner for Higher Education Prof. Barnard Matur thanked the Governor for finding them worthy to be appointed out of many qualified citizens of Plateau State.

He said they will put in their best to serve the people and ensure that the vision and mandate of the Lalong APC rescue administration is realized.