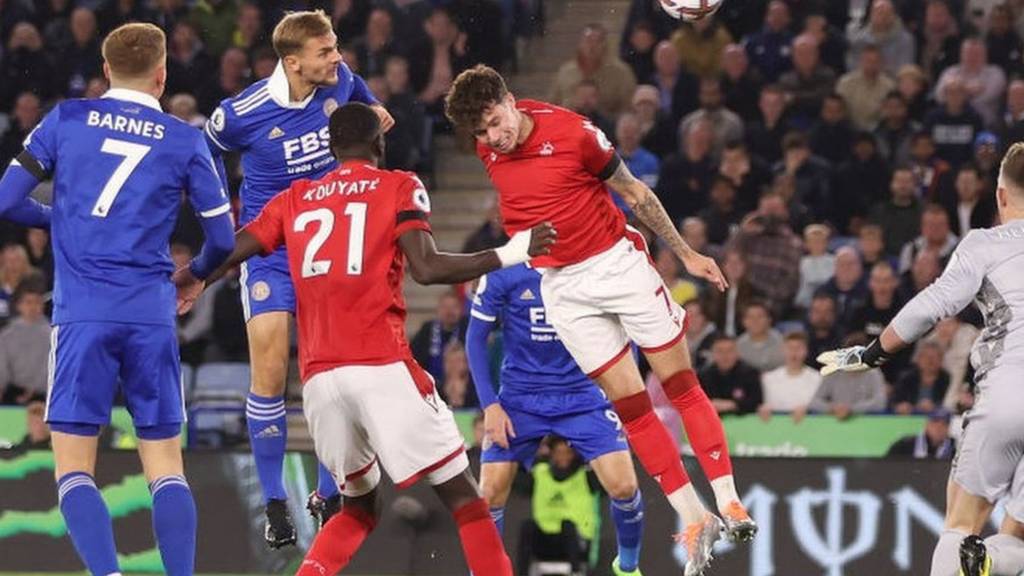 Leicester secured their first win of the season as they hammered Nottingham Forest to dump their local rivals on the bottom of the Premier League and pile the pressure on manager Steve Cooper.

James Maddison scored twice and created another for substitute Patson Daka, with Harvey Barnes curling home a superb effort as Brendan Rodgers’ side recorded their biggest home win since December.

For Forest, this first top flight East Midlands derby since 1999 was a night to forget.

Cooper’s side never recovered from conceding twice in as many minutes not long after striker Taiwo Awoniyi had struck a post when clean through on the home goal.

The Forest fans bellowed their support for Cooper as they sang songs of defiance with the game gone and their team slipping to a fifth straight defeat in a single season for the first time since January 2004.

However, after celebrating a long-awaited return to the Premier League after a 23-year absence, owner Evangelos Marinakis did not sanction the outlay on 23 summer signings in a belief Forest were about to go straight back down.

Cooper must hope his boss shows him more patience than former Huddersfield manager Carlos Corberan, who was sacked after 11 games at Marinakis’ Greek club Olympiakos earlier this month.

The evening was significant enough for Leicester chairman Aiyawatt Srivaddhanaprabha to fly in from Thailand to watch the team his family bankrolled to their memorable Premier League title in 2016 but cut spending on this summer, something he described as a “difficult short-term decision”.

In his programme notes he spoke of how a positive result could “galvanize” the club but as the game started, he had the expression of a man who could be a couple of hours away from having to make a very big decision.

As it turned out, by half-time the man affectionately known as Khun Top by Foxes fans was high-fiving supporters, who were ecstatic at how the evening was turning out.

Leicester’s opening goal required a couple of bits of fortune through Jesse Lingard’s mis-control and Scott McKenna’s deflection but the efforts that followed were moments of unquestioned quality, with Daka’s flick from Maddison’s cross to round off the scoring 17 minutes from time particularly impressive.

Rodgers certainly enjoyed them as he hugged his coaching staff, the joy at gaining that precious win obvious.
(BBC)