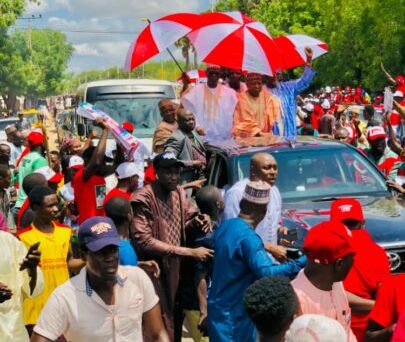 The ceremony which was held on Sunday at Arugungu in support of the former Senate Leader was aimed to showcase his political achievements in his senatorial district.

Addressing the mammoth crowd that graced the event, the former chairman of APC in Kebbi State, Arc. Bala Sani Kangiwa, said the occasion was to show solidarity for Mallamawa for his outstanding performance at the Senate and for the numerous developmental projects executed by the senator in his constituency.

He said Senator Abdullahi has proved that he is committed to the progress and development of the people of his constituency with the qualities of projects he initiated and executed in the Kebbi North Senatorial District.

He enjoined party faithful and communities in the senatorial district to rally round Mallamawa for more development that will impart positively on their wellbeing.

Speaking earlier, Senator Adamu Aliero told party supporters to remain prayerful, and law-abiding and dismiss any rumor on the legal tussle for the party’s primaries for Kebbi North and Kebbi Central senatorial seats.

The PDP Governorship Candidate, Bande in his address listed his plans for the Kebbi people if elected as governor in the coming election.

He said he plans to ensure even economic development of the state, provide job opportunities, promote agricultural activities, and raise the quality of education among others in the state.

Also speaking at the event, Alhaji Sani Dododo highlighted some developmental projects he said Dr. Abdullahi brought to his constituency which cut across all social strata of the society.

In his response, Mallamawa thanked the organizers of the solidarity rally and those who participated in the day-long activity while assuring them of continued meaningful and impactful representation at the Senate.