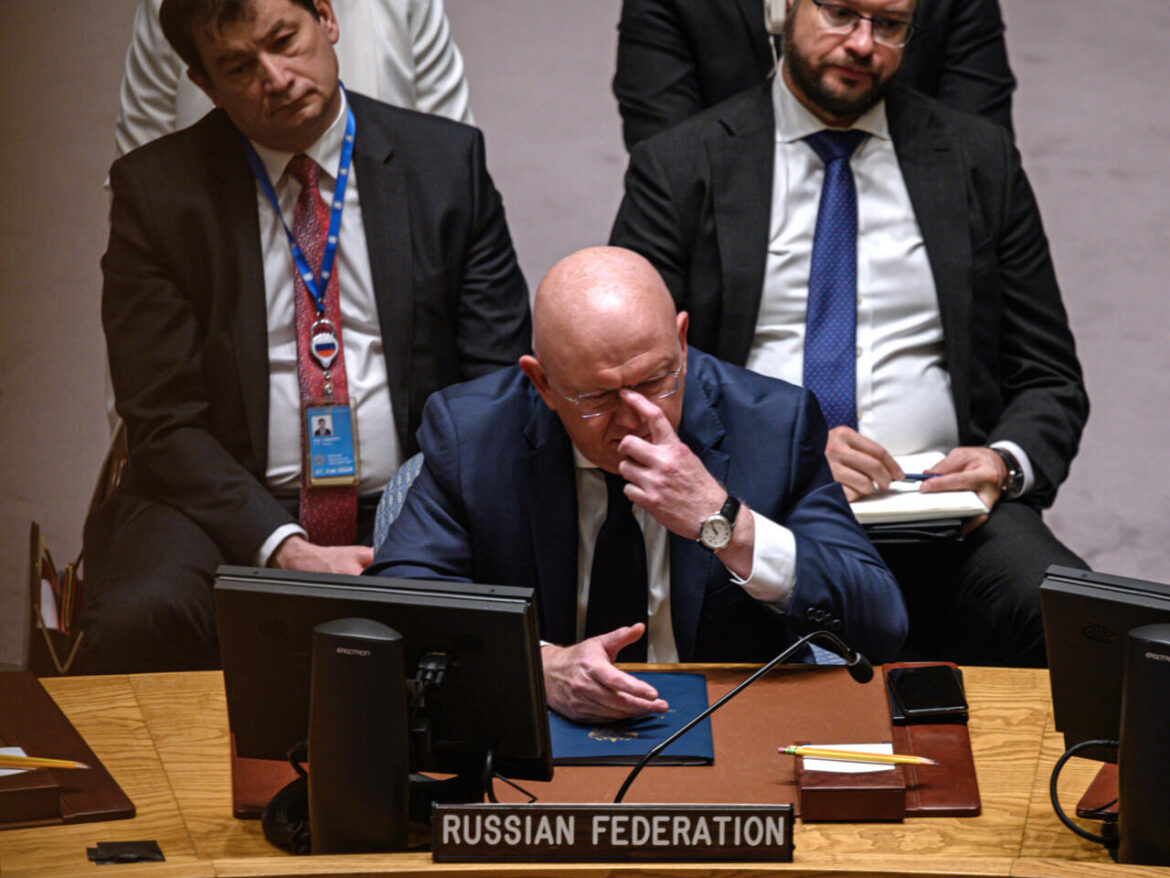 Russia has used its veto at the United Nations Security Council to scuttle a draft resolution that sought to condemn its annexations of Ukrainian territory.

But even Moscow’s close friends China and India chose to abstain rather than vote against the resolution that condemned the Kremlin’s latest actions in Ukraine.

United States ambassador to the UN Linda Thomas-Greenfield introduced the resolution to the Security Council meeting on Friday that called on member states not to recognise any altered status of Ukraine and obliged Russia to withdraw its troops.

Earlier, the biggest annexation in Europe since World War II was undertaken when Russian President Vladimir Putin proclaimed Russian rule over four regions that make up 15 percent of Ukraine’s territory.

The resolution, co-sponsored by the US and Albania, called for the condemnation of the “illegal” referendums held in Russian-occupied parts of Ukraine and for all states to not recognise any changes to Ukraine’s borders.

The resolution also called on Russia to withdraw troops immediately from Ukraine, ending an invasion that was launched on February 24.

Ten nations voted in favor of the resolution, while China, Gabon, India and Brazil abstained.

“Not a single country voted with Russia. Not one,” Thomas-Greenfield told reporters after the meeting, adding that the abstentions “clearly were not a defence of Russia”.

Russian ambassador to the UN Vassily Nebenzia, who raised his hand to indicate the only vote against the resolution, argued the regions, where Moscow has seized territory by force and where fighting still rages, chose to be part of Russia.

“There will be no turning back as today’s draft resolution would try to impose,” Nebenzia told the meeting.

Ukrainian ambassador to the UN Sergiy Kyslytsya said the single hand raised against the resolution “again testified to Russia’s isolation and his desperate attempts to deny reality in our common commitments, starting from the UN charter”.

The United Kingdom’s envoy, Barbara Woodward, said Russia had “abused its veto to defend its illegal actions” but said the annexations had “no legal effect”.

“It is a fantasy,” she added.
Al Jazeera’s James Bays, reporting from the United Nations in New York, said in response to the resolution the Russian representative “sounded incredulous”, and it was no surprise that Russia then used its power as a permanent member of the Security Council to veto the resolution.

“But it’s notable that four other council members decided not to support the resolution, and instead to abstain – China, Brazil, Gabon and India,” Bays said.

“Right after the Russian invasion of Ukraine, when the UN General Assembly voted at the beginning of March, 141 countries voted to deplore Russia’s actions. Following the Security Council vote, and the abstentions, some will be asking whether it’s possible to reach the high water mark again,” he said.
China abstained from voting on the resolution, but also raised concerns about “a prolonged and expanded crisis” in Ukraine.

China has been firmly on the fence over the conflict in Ukraine, criticizing Western sanctions against Russia but stopping short of endorsing or assisting in Moscow’s military campaign, despite the two nations declaring a “no-limits” strategic partnership in February.
In a surprise acknowledgement, Putin recently said China’s leader Xi Jinping had concerns about Ukraine.

Beijing’s UN ambassador Zhang Jun argued that while “the sovereignty and territorial integrity of all countries should be safeguarded”, countries’ “legitimate security concerns” should also be taken seriously.

“Over seven months into the Ukraine crisis, the crisis and its spillover effects have had a wide range of negative impacts. The prospect of a prolonged and expanded crisis is also worrying. China is deeply concerned about this prospect,” the ambassador said in a statement.
A US official, who spoke on condition of anonymity, said China’s abstention from the vote showed that Russia’s “sabre rattling” and moves that threatened other states’ territorial integrity put China in an “uncomfortable position”.

“We don’t have China signing up for this much more aggressive agenda that Russia is trying to sell,” the official said.

Are Mikel Arteta’s Arsenal really a lot better this season?