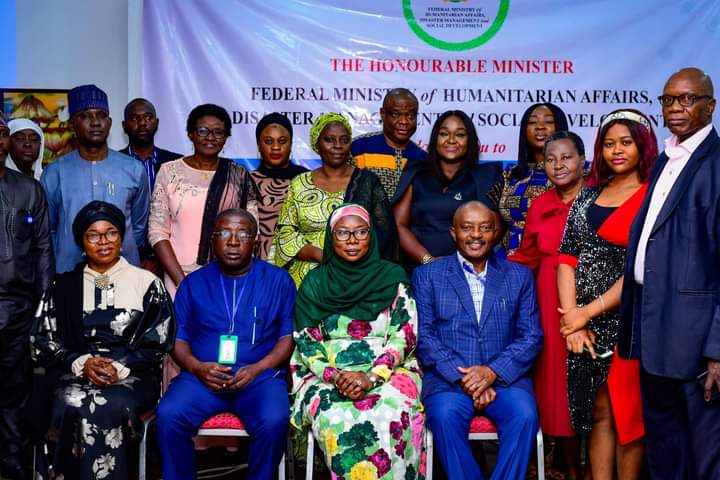 The Ministry of Humanitarian Affairs, Disaster Management, and Social Development have trained its Staff on Preventing and Countering Violence Extremism (PCVE) in Nigeria.

This was contained in a statement made available to journalists by the Head of the Press Unit of the Ministry, Rhoda Ishaku Iliya on   Wednesday.

According to the statement, the Permanent Secretary (PS) of the Ministry, Dr. Nasir Sani-Gwarzo while declaring open the one-day training program in Abuja said the Ministry organized the capacity building to sensitize staff on how to prevent and Counter violent extremism in the country.

The PS Who was represented by the Director of Legal Services of the Ministry, Barr. Garba Haganawega revealed that Nigeria is facing serious threats from violence and extremism, targeting individual groups and the state.

“These activities have claimed thousands of lives and property and have forced a million citizens to flee their homes, thereby creating a large population of Internally Displaced Persons and Refugees”.

Reflecting on the enormous humanitarian, political and developmental challenges caused by violent extremism,  the PS said, Refugees, Migrants, and Internally Displaced Persons have suffered repeatedly over the past years and are still suffering from Boko Haram attacks and other forms of violence both man-made and natural displacement.

“The Government has articulated broad policy to provide direction to tackle the menace of violent extremism in the country.

“The training is to enhance knowledge and prevent wrong narratives by educating the Staff on Preventing and countering violent extremism.

“The training is in collaboration with the Office of the Security Adviser (ONSA). Resource Persons were drawn from the Office of the Minister of State FCT, International Organization on Migration (IOM), Operation Safe Corridor (OPSC), and Civil Society Organizations (CSOs), made presentations on different topics such as New Approaches of PCVE and plans of Action on PCVE; Prevention Strategies, Stages of Radicalization and Role of Education in PVE; and deradicalization, Rehabilitation and Integration Process”.

Earlier, the Special Adviser to the Hon. Minister of State FCT, on security and counter-terrorism, Maryam Ikunaiye, expressed her gratitude to the Minister of Humanitarian Affairs, for organizing capacity building on Preventing and Countering Violence Extremism (PCVE).

She said in 2016, the United Nations had made effort for a holistic Security approach that includes Systematic Preventive steps to address the conditions that drive individuals to radicalize and join Violence extremism.

Ikunaiye added that President Buhari felt dialogue would be the best option in line with the global practice as Preventive measures.

“The Heads Government of Commonwealth Nations and ONSA agreed on a non-coercive approach as the drivers of Violence extremism that targets communities.

“As a result of the above effort Ministries, Department and Agencies were charged to establish PCVE Desk to address PCVE matters and be conversant with PCVE   in order to carry out management against conditions conducive for radicalization and Violence extremism”.