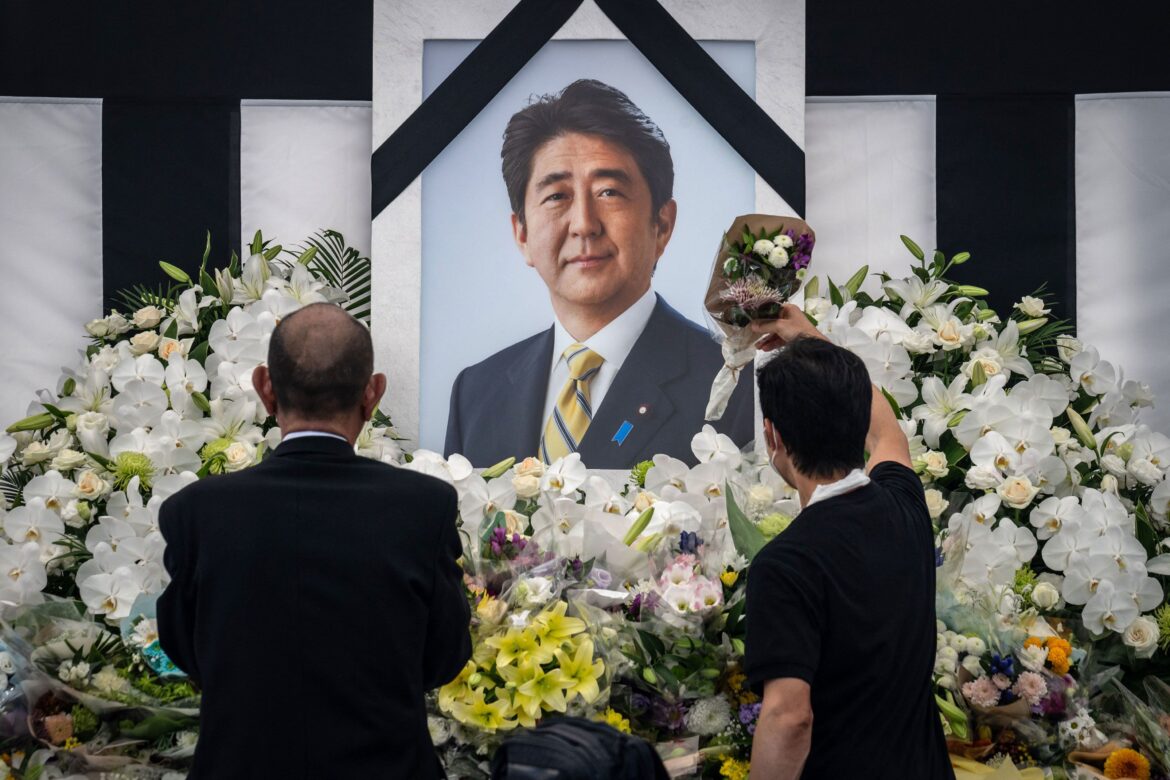 Japan has bid farewell to assassinated former Prime Minister Shinzo Abe with a rare state funeral that divided the nation.

The event began at 2pm (05:00 GMT) with the Japan Self-Defense Forces firing 19 shots in honor of Japan’s longest-serving prime minister as his wife, Akie Abe, carried his ashes into Tokyo’s Nippon Budokan hall.

A military band played the national anthem and soldiers dressed in white uniforms took Abe’s ashes and placed them on a pedestal decorated with yellow and white chrysanthemum flowers.

Attendants observed a moment of silence for Abe.

Outside, in a nearby park, thousands of Japanese people queued to offer floral tributes to the slain politician. Some reported waiting for up to three hours.

But the state funeral has also prompted protests in downtown Tokyo, with demonstrators criticizing Abe for his legacy of divisive policies as well as the event’s $11.5m bill.

A recent poll conducted by the Mainichi newspaper shows that some 62 percent of respondents do not approve of a state funeral for Abe.

Revelations about ties between Abe, his ruling Liberal Democratic Party (LDP) and the Unification Church have also spurred public outrage.

Abe’s assassin, Tetsuya Yamagami, blamed the church – which critics call a “predatory cult” – for his family’s financial ruin and had told investigators that he shot Abe on July 8 because of the prime minister’s support for the church.

Since then, Japanese media has reported extensively on how the church forcibly extracted exorbitant donations from its followers in the country.

An internal LDP survey had found that nearly half the governing party’s 379 national legislators also had ties with the church and affiliated groups. These range from attending the church’s events to receiving donations and accepting volunteers for election support.
The disclosures have caused Prime Minister Fumio Kishida’s approval ratings to plunge below 30 percent.

In a bid to address the anger, Kishida shuffled his cabinet and ordered LDP legislators to sever ties with the Unification Church.

But Kishida defended the state funeral as necessary, citing Abe’s “achievements” over his eight years in office and the receipt of some 1,700 messages of condolences from more than 260 countries and regions.

Some 700 foreign dignitaries attended Tuesday’s event and the prime minister also cited the chance to conduct diplomacy as a reason for the funeral, spending Monday night and Tuesday morning in meetings with world leaders.

In a 12-minute eulogy for Abe, Kishida praised his late mentor as an inspiring politician with a clear vision for post-war economic growth and development of Japan and the world, as well as promoting the concept of a “free and open Indo-Pacific” as a counter to China’s rise.

Looking up at a large photo of a smiling Abe, Kishida said the loss came too soon.

“You were a person who should have lived much longer,” Kishida said.

“I had a firm belief that you were to contribute as a compass to show the future direction of Japan and the rest of the world for 10 or 20 more years.”

The state funeral for Abe, who received a private funeral days after his assassination, was the first for an ex-premier since former Prime Minister Shigeru Yoshida in 1967.

But Japanese opposition parties had boycotted the event, saying Abe did not deserve the honor.

They pointed to contentious policies such as Abe’s push to revise Japan’s pacifist constitution and his nationalistic rhetoric that had soured relations with neighboring countries, including South Korea.

At the time of his resignation for health reasons in 2020, Abe was also mired in scandals in which he was alleged to have misused political funds and engaged in cronyism. He was also facing criticism at the time for his poor handling of the COVID-19 pandemic and his determination to hold the Tokyo Olympics and Paralympics despite the outbreak.

“Kishida’s decision to honor Abe with a state funeral without consulting the Diet or judiciary smacks of exactly the arrogance of power that the public associates with Abe,” Jeffrey Kingston, professor of history and Asian studies at Temple University in Japan told Al Jazeera.

“By a 2-1 margin the public opposes the state funeral and much of this opposition can be attributed to Abe’s toxic legacies and limited achievements,” Kingston said.

“Polls suggest few believe Kishida has handled the Church issue competently and this is part of the reason he has plunged in the polls,” he said.

“Supporters hope it will all blow over but the media spotlight may sustain the anger and now there are the Olympic bribery scandals that provide further reminders about the sleazy ways and means of the Abe government.”