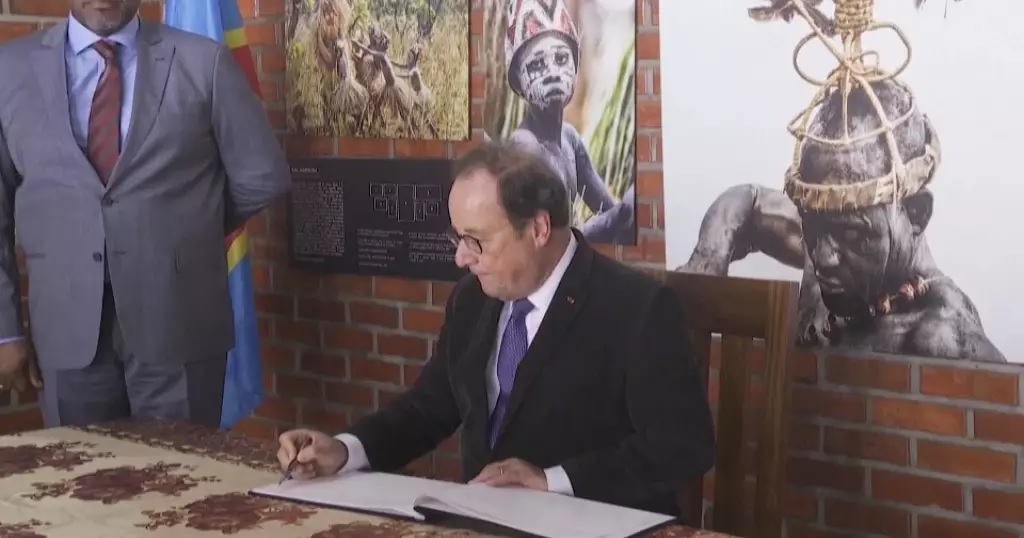 Former French president, François Hollande, is visiting the Democratic Republic of Congo as the country faces a resurgence of violence in the volatile east.

On Tuesday, he was at the National Museum in the capital, Kinshasa, where he called for a ‘more effective’ United Nations force to help bring about peace in the region.

There has been much criticism recently of the UN mission in the DRC, with demonstrators calling for it to leave the country, saying that after 20 years of presence, MONUSCO had still not brought about peace.

But Hollande said he believed this would be a mistake which would play into the hands of groups that terrorize the population.

‘I think that it will undoubtedly be one of the responsibilities of the United Nations Secretary General, Antonio Guterres, and also of the French who are in charge of peacekeeping missions, to set up a force that is much more efficient in order to go into combat with the groups that terrorize people,’ he said.

Peace initiative
In an attempt to calm tensions, French President Emmanuel Macron met with the leaders of the Democratic Republic of Congo and Rwanda on the sidelines of the recent United Nations General Assembly.

The Congolese president, Felix Tshisekedi has accused Kigali of backing rebel attacks in his country.

As Hollande prepared to travel to the east of the DRC, he said the message he wanted to convey was that there was a need to end all kinds of interference.

‘It is an area that is still, unfortunately, troubled and has many civilian victims. There is a need, and President Macron has also taken the initiative, to promote peace in this region and bring an end to foreign interference and the attacks that are committed there and, also the aggressions of which women are the victims,’ he said.

New hospital ward
While in the eastern city of Bukavu, Hollande attended the inauguration of a new ward at the hospital of renowned Congolese gynecologist and Nobel Peace Laureate, Denis Mukwege.

The doctor is one of the world’s leading specialist in the treatment of wartime sexual violence and a global campaigner against the use of rape as a weapon of war.