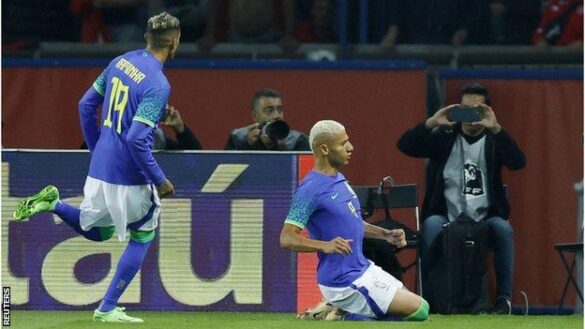 Richarlison says racism will continue “every day and everywhere” unless the authorities “punish” the perpetrators after a banana was thrown at him during Brazil’s 5-1 win over Tunisia.

“As long as it’s ‘blah blah blah’ and they don’t punish, it will continue like this, happening every day and everywhere. No time bro!” Richarlison tweeted following the match.

Brazil had posed with an anti-racism banner prior to kick-off.

The team lined up with a message that read: “Without our black players, we wouldn’t have stars on our shirts.”

In a statement, the Brazilian Football Confederation (CBF) said it “reinforced its position to combat racism” and “repudiates any display of prejudice”.

In a separate statement, CBF president Ednaldo Rodrigues added: “Whether on or off the field, attitudes like this cannot be tolerated.”
Richarlison’s goal had restored Brazil’s lead after Montassar Talbi cancelled out Raphinha’s opener.

Neymar added a penalty before Raphinha claimed his second goal of the evening and Pedro wrapped up the scoring after Tunisia had Dylan Bronn sent off.
(BBC)