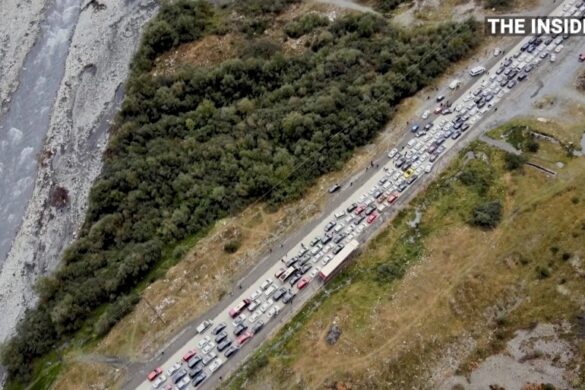 The Kremlin says no decision has been taken on whether to seal Russia’s borders to stop an exodus of military-aged men fleeing the country after days of chaotic scenes during partial mobilization for its war in Ukraine.

Asked on Monday about the prospect of the border being shut, Kremlin spokesman Dmitry Peskov told reporters: “I don’t know anything about this. At the moment, no decisions have been taken on this.”

Reports that Russia might close the frontier have contributed to turmoil since President Vladimir Putin gave the order last week to call up hundreds of thousands of reservists in the biggest escalation yet of the seven-month Ukraine war.

Flights out of Russia have sold out and cars have piled up at border checkpoints, with reports of a 48-hour queue at the sole road border to Georgia, the rare pro-Western neighbor that allows Russian citizens to enter without a visa.

“Panic. All the people I know are in panic,” said David, a Russian who gave only his first name out of fear of reprisals, in an interview with The Associated Press news agency at a border crossing with Georgia. “We are running from the regime that kills people.”

Long lines of cars were also seen on roads to border crossings with Kazakhstan and Mongolia.

“Everyone who is of conscription age should be banned from travelling abroad in the current situation,” Sergei Tsekov, a senior lawmaker who represents Russian-annexed Crimea in Russia’s upper house of parliament, told the RIA Novosti news agency.

“Many people don’t understand what is going on – who should go and who shouldn’t go,” Vall said, adding that anti-conscription protests had been staged across the country in recent days.

“It’s a complicated situation. Russia hasn’t announced such mobilization since World War II and there is little experience in doing this, both on the part of the government and on the part of the people,” he added.
The military mobilization was accompanied by an announcement by Putin that Moscow would stage votes to annex four Ukrainian provinces occupied by its forces. The West calls the votes, due to conclude on Tuesday, a sham pretext to seize territory captured by force.

The military call-up has led to the first sustained protests in Russia since the war began, with one monitoring group estimating at least 2,000 people have been arrested so far. All public criticism of the “special military operation” in Ukraine is banned.

The past few days have also seen the first sustained criticism of the authorities on state-controlled media since the war began, with pro-Kremlin commentators denouncing officials for calling up people too old to fight.

On a talk show on Russia’s main state channel, pro-Kremlin commentators demanded harsh punishments for draft officers who call up the wrong people.

“Can we just shoot them?” asked presenter Vladimir Solovyov. “I am in favour. I would just drag out a couple of those draft officers publicly,” he said. “Grab that draft officer by the ear and send him to the front in the Donbas!”

Peskov acknowledged that some call-up notices had been issued in error, saying mistakes were being corrected by regional governors and the Ministry of Defence.

Russia counts millions of former conscripts as official reservists. The authorities have not spelled out precisely who is due to be called up – that part of Putin’s order is classified – but have said they will draft 300,000 people, mostly with recent military experience.

Meanwhile, the UK’s Ministry of Defence said on Monday “many tens of thousands” of draftees had already received orders. They were expected to be sent swiftly to the front line where they were “likely to suffer a high attrition rate”, it said.

“The lack of military trainers, and the haste with which Russia has started the mobilization, suggests that many of the drafted troops will deploy to the front line with minimal relevant preparation.”

Images circulating on the internet have shown clashes between crowds and police, particularly in areas where ethnic minorities predominate, such as mainly Muslim Dagestan in the south and Buryatia, home to Mongol Buddhists, in Siberia.