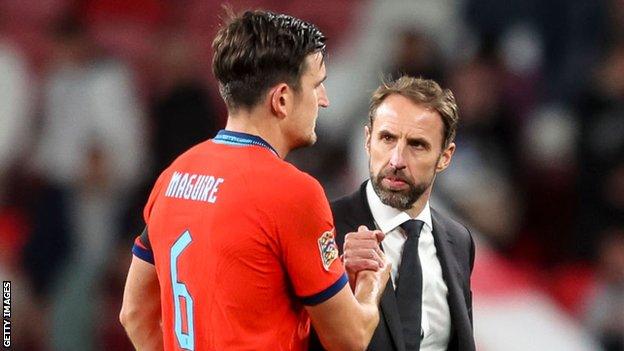 Gareth Southgate got just what he wanted from England if the measure was spirit and desire but exactly what he did not need from hapless Harry Maguire and goalkeeper Nick Pope.

The manager was stretching the patience of England fans when he declared the dismal defeat in Italy as “a step in the right direction” – but his side demonstrated character and looked like a team fighting for themselves and their manager in the fluctuating 3-3 draw with Germany in their last game before the World Cup in Qatar.

England were two down and staring at a third straight loss before they summoned up not just their first goal from open play in 565 minutes courtesy of Luke Shaw but two more from substitute Mason Mount then Harry Kane’s penalty to put them in sight of a first win in six games.

Germany’s lead was, in the most part, down to Maguire after he clumsily fouled Jamal Musiala for Ilkay Gundogan’s penalty then lost possession and was out of position as the visitors’ counter-attack concluded with a sumptuous Kai Havertz finish.

England’s defensive cause was not helped by a worrying hamstring injury that forced John Stones off in the first half and an increasingly jittery performance from Eric Dier.

It looked all over at 2-0, but England found what has deserted them in recent months with three goals in that 12-minute burst. It was evidence that this team does have the strength and threat Southgate believes it possesses.

England’s comeback had Wembley bouncing until Pope, known for his assured handling even if he was very suspect with the ball at his feet, found his strongest quality deserted him as he fumbled Serge Gnabry’s routine shot at the feet of the lurking Havertz with three minutes left.

The draw means this is England’s longest run without a win since April to June 1993, but the final whistle was warmly applauded by those who had seen a thrilling second half and at least some optimism to cling to before the action begins in Qatar.

Jude Bellingham showed his class once more, surely a certain World Cup starter now, while the vibrant substitutes Mount and Bukayo Saka delivered the sort of drive and positivity that makes England look a different proposition from the stodge seen recently.

England dug deep when they could have subsided. It would have been easy for heads to drop but they fought with conviction to go so close to an unlikely win.

In the Nations League context, with England already relegated, this was a dead rubber but any meeting with Germany carries significance and the second half carried plenty of excitement.

That was the good part. It was the least Southgate wanted – and needed – after England’s fans turned on him for the first time following the losses to Hungary at Molineux and Italy in Milan on Friday.

And then there is the ‘but’. A very large one.

The big problem, and it will not go away, is that Maguire showed exactly why he has been dropped by Manchester United and why so many questions are asked about Southgate’s continuing faith in him.

The former Leicester City defender was relatively solid until a heavy touch and a poor pass gifted Musiala the ball in dangerous territory. The defender was slow and ponderous to react, resorting to bundling the forward over in desperation.

The only surprise was referee Danny Makkelie needed to gaze at a television screen to confirm what everyone saw in real time before pointing to the spot.

Two mistakes for the price of one, and Germany were happy to take the gift.

It got worse as Maguire started chasing the ball in an attempt to make amends, desperation that ended with him being robbed upfield and left behind the play as Germany went two up.

Southgate will support him publicly but how can he seriously consider starting Maguire in England’s World Cup opener against Iran on 21 November on current form?

The England manager’s loyalty is based on the fact Maguire has never let him down when it mattered. Can he really take that chance after what he saw here and what Maguire has shown over many months?

If he does, it seems to be a case of stubbornness or blind loyalty as the television cameras caught Maguire with the blank stare of a player grasping for some semblance of past form but falling desperately short.

Maguire’s confidence is shattered, he is hopelessly out of form and there is no suggestion – and on this evidence nor should there be – of United manager Erik ten Hag calling on his services on too many occasions before the World Cup.

Southgate is standing by Maguire against all the evidence but it is reaching the point where it is not doing the player any good to stick with him.

A solid Maguire performance might just have reduced the noise around his continued selection. This has done exactly the opposite.

It was also a very bad night for keeper Pope, who has put his chances of becoming deputy to first-choice Jordan Pickford – now surely established as England’s undisputed number one – in serious danger.

Pope looked nervous with the ball at his feet in Italy and was even more uncertain here before really tarnishing his performance with that costly late error. He has had two opportunities to advance his claims and has not taken them.

England sent their supporters’ home happy with what they had seen and this deserves to be called a step in the right direction after the misery and mediocrity of Hungary and Italy.

It will have improved the mood, giving England an injection of confidence before Qatar, but Southgate now has a big call to make on Maguire who, at the moment, looks in no shape for the pressures a World Cup campaign will bring.

FERMA, Anambra to Engage in Strategic Partnership to Maintain Roads