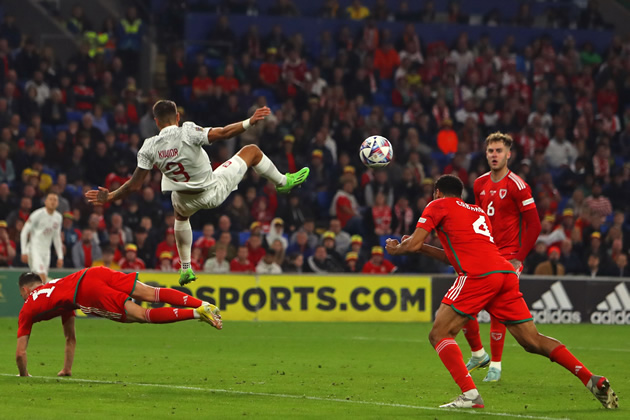 Wales were relegated from the top tier of the Nations League after they were beaten at home by Poland.

The visitors, needing only a draw to secure their survival at Wales’ expense, had the better of a goalless but full-blooded first half in which tempers flared more often than either side was able to create chances to score.

Wales had chances to equalise, with Brennan Johnson’s low shot superbly saved by Wojciech Szczesny before Gareth Bale headed against the crossbar in added time.

But Lewandowski’s moment of inspiration was a worthy decisive contribution in an encounter otherwise relatively low on quality.

Wales finish bottom of Group A4 with just one point from six games in their first campaign at the highest level of the Nations League, although they are in good company with the likes of England also dropping down to the second division.

And as much as Robert Page’s side would have liked to have maintained their place in the top flight, their most significant challenge is yet to come.

Wales’ next game will be their first match at a World Cup for 64 years as they begin their campaign in Qatar against the United States on 21 November.

World Cup the bigger picture for depleted Wales
The spectre of the World Cup – and the need for Wales to prioritise that ultimate goal – has dominated their first experience of sitting at Europe’s top table in the Nations League.

As well as having to cope with injuries and suspensions, Page had to field largely second-string sides in a congested June schedule as he prepared for the World Cup play-off victory over Ukraine.

Wales have competed admirably considering those limitations, drawing against world number two-ranked Belgium during the summer and twice getting denied well-earned points against the Netherlands by added-time goals.

And while this was by no means a reserve Welsh side, their task against Poland was made decidedly more difficult with Aaron Ramsey, Joe Allen, Harry Wilson and Ben Davies missing through injury and Ethan Ampadu and Chris Mepham suspended.

Allen, Ramsey and Ampadu were particularly missed in midfield, where Poland were able to seize control of the encounter in a tempestuous first half.

Both sides were shown yellow cards as tackles flew in and the home crowd voiced their anger at Polish play-acting as well as perceived indulging of it from referee Andris Treimanis.

Poland were also the better side, and should have led when Szymon Zurkowski was set free by Lewandowski’s through ball, only to get his legs in a tangle and lose possession to Joe Rodon and Neco Williams.

Unable to keep the ball for long, Wales only posed a fleeting threat on the break, with Daniel James haring clear from a hopeful long ball before seeing his low shot saved by Szczesny.

The second half largely followed the same pattern but, shortly before the hour mark, Poland took the lead thanks to a moment of genius from their captain and talisman.

Receiving a firm pass to his feet with his back to goal, Barcelona striker Lewandowski evoked Dennis Bergkamp’s wondergoal for Arsenal against Newcastle in 2002 as he flicked the ball with the outside of his boot but, rather than setting up himself, this touch was for Swiderski, who finished well.

With flares set off in the Polish end and the Welsh fans responding by roaring their side on, Johnson came close to equalising two minutes later when he cut inside on to his left foot and shot powerfully towards the bottom corner, only for Szczesny to palm it away for a corner.

The more desperate Wales became in their search for a goal, the more cynical Poland became with their gamesmanship, feigning injuries and wasting time wherever possible.

It was ultimately enough for Poland to avoid relegation and, although Bale’s late header hit the bar, time had run out for Wales and their first taste of the Nations League top tier.