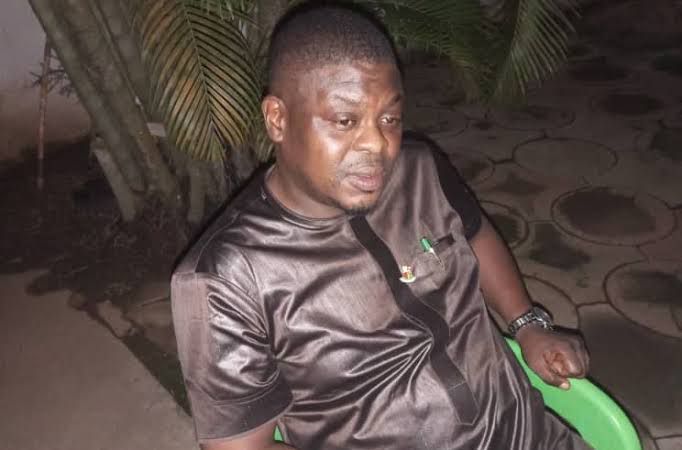 The recently suspended chairman of Ido local government in Oyo state, Mr. Sheriff Adeojo is currently receiving knocks across the state for physically assaulting a lawyer, Barr. Tolu Fowode at a lounge in Ibadan over the weekend.

This was contained in a statement by the Publicity Secretary, Better Representation Solidarity Group (BRSG), Hon. Ade Ajayi

According to the statement, the BRSG condemns the actions of the embattled People’s Democratic Party (PDP) member, who is one of the sons of elder statesman, Chief Yekini Adeojo.

Reports say he attacked Fowode unprovoked and off a discussion that seemed harmless.

“We were just having a conversation in the VIP area when this guy just came over to Barr. Tolu acting pretty violent, before we knew it, he got physical and although shocked, we still tried to hold him to no avail”, one of the sources who pleaded anonymity, confirmed.

A female witness also expressed disappointment at Adeojo’s conduct despite his supposedly eminent background. “This guy was launching and landing several blows on Barrister Fowode, we were able to restrain him at the point he reached for the bottle. Even though he seemed a bit drunk, it still does not excuse his behavior at all, at least he was sober enough to pick his victim. I’m just disappointed please”, she expressed.

A Staff of the said lounge, 530 lounge Oluyole, in a brief statement expressed regret at the action of “a customer we later identified as Mr. Sheriff Adeojo attacked another patron, a named Barr. Tolu Fowode on that fateful Thursday, September, 22nd 2022, although, we immediately swung in to stop the assailant before further damage.

While this incident is regretted, we apologize to Barrister Fowode and we assure all our customers of their safety when they come to our lounge”.

Barr. Fowode, who comes from a renowned family and who doubles as a ranking member of the Nigerian Bar Association (NBA) in Oyo state, is said to be recuperating well.

It is particularly reported that leaders of the PDP in the state are worried that the embattled Sheriff Adeojo is in the news for the wrong reasons, again.

It will be recalled that Mr. Sheriff Adeojo was recently suspended indefinitely by members of Ido assembly due to what they termed as a “gross lack of accountability and poor infrastructure management across the 10 wards that made up the Local Government Area”.

Adeojo was not reachable to make a comment at the time of this report.