Menu
Home Sports Who starts for Nigeria in Osimhen and Sadiq’s absence?
Sports 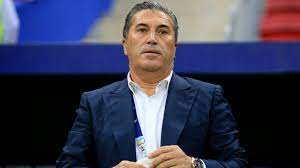 It goes without saying that Nigeria’s preparations for next week’s friendly with Algeria have been untidy.

From the injuries suffered by Victor Osimhen and Umar Sadiq before Jose Peseiro’s squad was revealed to the spate of withdrawals that have followed since the September 17 announcement, the Super Eagles facing off with two-time African champions Algeria will be a mishmash of a side.

Having said that, there is a feeling an alarmist view has greeted reservations about the team’s attack. The last few years have seen a spate of strikers emerge in the Super Eagles team, meaning absences are not as felt and replacements still carry a menace.

Quite simply, centre-forward is not a problem position for the Super Eagles. This is unlike the backline and central midfield, which have proven to be continuing problems.

It is striking that supporters are not worried about a dearth of options to face Algeria in Tuesday’s friendly, rather several combinations have been put forward in a plethora of possible XIs.

Despite Osimhen and Sadiq’s absence, Peseiro has Terem Moffi, Cyriel Dessers, Taiwo Awoniyi and Kelechi Iheanacho to turn to…not a bad cadre of strikers to select from.
In truth, supporters might have fussed about the attackers’ injuries and withdrawals in this international window had the nation made it to the 2022 World Cup. The apprehension with a tournament imminent will have been evident. But that is not an immediate concern.

First, it is worth recollecting that Peseiro has favoured two-striker formations since taking charge of those friendlies against Mexico and Ecuador, before sticking to his guns in Africa Cup of Nations qualifying.

The Portuguese did play with Osimhen down the middle in the second half against Sierra Leone, taking off the rather ineffectual Sadiq as the Lone Stars outnumbered his troops in the middle of the park.

But the broad approach appears to have favoured striking partnerships and more of the same is expected when the West Africans do battle with their North African opponents.

Moffi is almost everyone’s sure-fire pick to play from the off, with Iheanacho, Awoniyi and Dessers all jostling for the second spot. Perhaps, for good reason too.

The Lorient man joined up with the national team in outstanding form and has been irrepressible in recent weeks. The striker has been a beneficiary of Regis Le Bris’ promising start since replacing Christophe Pelissier in the summer, guiding the club from Brittany to its best-ever Ligue 1 start.

Six of Moffi’s eight domestic goals have come in as many games and the 23-year-old is seemingly enjoying sharing the responsibility with Dango Ouattara after Armand Lauriente departed for Sassuolo on deadline day.

Exactly half of the Nigerian’s goals have been assisted by the Burkina Faso international, with the twin attackers becoming Lorient’s dynamic duo in an unprecedented start in Ligue 1.

Moffi has still had to finish those chances and a 35 percent conversion rate emphasises his overperformance. That rate was 25% in year one in Brittany, before last year’s dip to 13 percent produced only eight league goals, a return the in-form striker could surpass before the new year.

The non-penalty Expected Goals (npxG) of 4.0 stresses the centre-forward’s run and 0.86 goals per 90 ranks 14th in the division. Considering only players with three goals or higher instantly takes Moffi to third, behind Neymar and Kylian Mbappe. Not bad company to be in.

Deciding on Tuesday night in will be tricky, especially as there is no obvious choice.

Iheanacho is the most senior player but an underwhelming start to 2022-23 has not gone unnoticed. There is also the ingrained feeling that pairing two left-footed strikers may be unworkable, particularly when they broadly favour drifting to the inside-right channel.

As for Awoniyi, a mixed start has produced one fortuitous goal and an instinctively headed strike and being in and out of Steve Cooper’s squad has not helped him settle at Nottingham Forest.

Still, the fact he favours running the left half-space immediately makes him a solid partner for Moffi, but Dessers will have a thing to say about crowning the erstwhile Union Berlin marksman.

However, the absence of goals for the Cremonese striker is concerning.

Indeed, transitioning to one of Europe’s top five leagues means a settling period was expected for Dessers. It is doubly difficult when your side lacks a creative spark and a consistent flow of quality chances.

Cremonese have created only seven big chances in Serie A — the lowest in the division — and their Expected Goals (xG) as it stands is 5.8, third-bottom in the league.

Admittedly, Dessers’ underlying numbers show the former Genk forward should have at least opened his account for the season, something he figures is only a matter of time.

The forward hopes the international break gets him going and there is a feeling he could play from the off in tandem with Moffi.

This is not an upshot of his superior form compared to Iheanacho and Awoniyi, but the continuity that partnership offers after playing together in the off-season’s friendly games a few months back under Peseiro.

Time will tell whether Nigeria’s tactician thinks likewise and there will be an observant eye on the pair selected to lead the line against the North African nation in Oran.