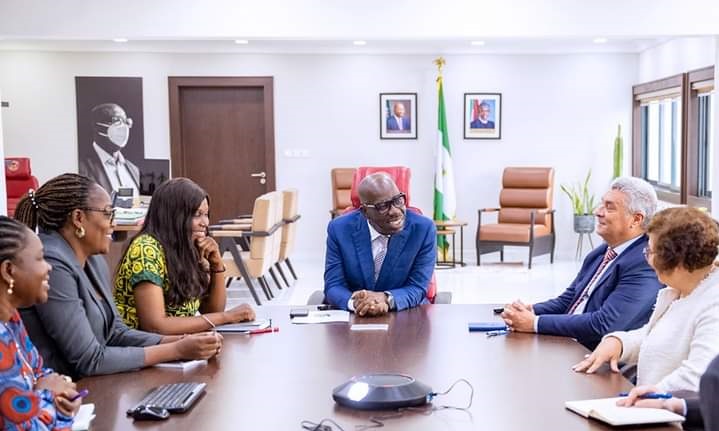 Edo State Government has expressed its readiness to partner with the Turkish Government to drive socioeconomic development across different sectors in the State.

The State Governor, Mr Godwin Obaseki, made this known recently while receiving the Turkish Ambassador to Nigeria, His Excellency, Hidayet Bayraktar, who paid him a courtesy visit at the Government House, Benin-City.

Governor, while highlighting critical areas said that the Turkish Government has recorded significant success (manufacturing, tourism, and health sector development), and noted that Edo State is eager to attain similar milestones to reposition its economy by taking advantage of the opportunity to build human capacity to boost productivity.

“Turkey in the last two decades has built itself out as a major economic power, a major manufacturing base, and thanks to your relationship with Germany, you’ve made your airport in Istanbul a major transit. So, everybody wants to fly Turkish. That in itself has opened up the Turkish market to us in Nigeria”.

Obaseki explained that Edo will leverage the strong Nigeria-Turkish ties to strengthen its local economy in areas of competitive advantage.

He pointed at human capacity development; use of technology; service delivery; manufacturing; healthcare and tourism as areas that the State is looking to leverage.

“There has been the Nigeria-Turkish relationship for the last 60 years and there have been certain things the Turkish people and Government have done well.

“For us in Edo, we are taking advantage of the fact that we have seen the end of crude oil.

“We are positioning ourselves for the future, for the next economy which is about human capacity, it’s about our ability to key into the world of technology because, with technology, you can now catch-up manufacturing, catch on just productivity as a whole.

“And then, take advantage of our location as a hub in the country, to provide goods and services which the country needs”.

Highlighting Edo’s several unique endowments, Obaseki said the State is seeking Public-Private Partnerships to take advantage of its ready market especially in the areas of manufacturing and health care to deliver quality services and products.

“The way we look at it, can we work together and build a good hospital here?

“We are building a medical city because of the advantage of electricity. We have had a medical school here for the last 50 years, so we have a large pool of medical practitioners and there is an internal market for healthcare and healthcare services.”

The ongoing plans by the State to revamp the arts, culture, and tourism sectors, were also highlighted, with the Governor explaining that the Tourism Master Plan will birth the Benin Cultural District with emphasis on preserving Edo’s unique monuments.

“What we have done is to design a whole cultural district, it’s beyond the museum, you know, it’s about storage facility because these things are old.

“ It’s about research, a lot of research work hasn’t been done and needs to be done, it’s archeology, a bit of archeology work is currently going on and a lot more needs to happen.

“It is also about conservation and preservation of some of the monuments like the moat system. We have the largest man-made moat in the world, the Governor remarked.

Ambassador Bayraktar while commending the State Government on laudable strides, especially with the ongoing Edo State Museum of West Africa Art (EMOWAA) project, noted that the Turkish Government will be glad to partner with the State and build human capacity within the State’s ecosystem.

Fans Rain Praises on Tems, Rate Her Above Davido, Wizkid