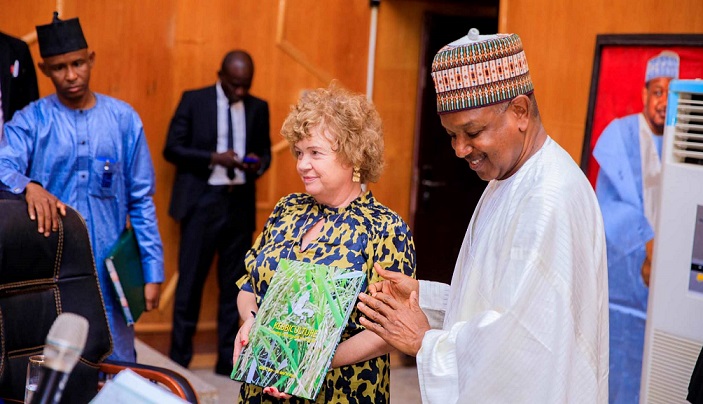 The British High commissioner to Nigeria Mrs. Catiriona Laing on Wednesday said the British Government will deepen its economic and cultural relationship with Kebbi State.

Laing stated this in Birnin Kebbi during an official visit to the state.

She said over the years there is an existing and deep relationship between Nigeria and Britain which made the late Queen visit Nigeria twice in her lifetime.

The high commissioner said she and her team were in Kebbi State to see what the state is doing in respect of its successful agricultural program and economic activities and to see where to learn and intervene.

“We are going through a critical time in Britain with the loss of the Queen. Before she died she talked about her 2 visits to Nigeria.  King Charles lll will also have a good relationship with Nigeria as the late Queen did.  I’m confident that the relationship will grow stronger”, she said.

She added that Kebbi is very successful in her agricultural activities, particularly in rice production and its government appears to be committed to its progress and development. She enjoined other states in the country to learn from Kebbi in the area of agriculture.

Laing said “Kebbi is very important in the committee of states in Nigeria and peace. We will see where more to learn from its agriculture program.

There is security in Kebbi and its economy is good. We are taking details to see where we can help Kebbi State in any of our programs”.

She commended Governor Bagudu’s wife on her cancer program saying it is a good initiative to help Nigerian society in dealing with the ailment.

On the country’s coming elections she said Nigeria is the best democracy in Africa and people will be watching closely. She added that because democracy is threatened in some of the neighboring countries, Nigeria’s elections are crucial for security and peace in Africa. And it will be good for its citizens, Africa, and the world in general.

In his response, Governor Atiku Bagudu said the people of Kebbi State appreciate the high commissioner’s visit and it will foster more relationships between the state and Britain.

He said the emirate system has helped to develop mutual understanding and boost competition in every area of human endeavors in the state and has helped in its conflict resolution mechanism existed in the state.

“The earliest foundation has helped the state in every area of its economic life such as fishing, agriculture, mining, and rice production. Our fishing activity is been threatened due to lack of water occasioned by climate change and overfishing”, he said.

He added that there is frustration in the fishing community because fishermen in the state have not been able to meet their needs due to climate change.

He also said his government is working with communities to see that the fishing business succeeds in the state and young men and women have taken an interest in fishing activity.

“We are supporting every economic group to do better. We have done much to improve our agriculture. We braced the Anchor borrowers program and each farmer is expected to achieve 6 to7 tonnes per hectare.

“We also entered into MoU with Lagos to show we can compete favorably with the production of lake rice. These are efforts to make sure Nigeria is sufficient in rice production. And most of the participants in the rice chain are women”, the governor said.

Bagudu stated that the state has been able to attract investors such as WACOT Rice mill and other rice mills by both private and indigenes investors of Kebbi State.

He also said the pastoral community is not left out as over 50 schools and water are provided for them while small-scale loans are given to small businesses in the state.

With the support of the federal government, we are one of the states on the artisanal mining board. And over 20,000 of them have been registered.

The governor told the visiting British High Commissioner that though the state is experiencing insecurity none of its local governments has been shut down. “We have in the last 7 years experience rise in our IGR we got 15m dollars as a reward for the best-performing state.

“On immunization and health care, with the support of UNICEF child /mother mortality has dropped significantly. We passed the child right act and we are currently benefitting from the world bank program such BESTAL; there are a number of children coming from Niger and Benin republic to school in Kebbi.

“There are investment opportunities in Kebbi State and the success we have achieved in agriculture has created the foundation for the establishment of Tomato Company and many others in parts of Kebbi State.