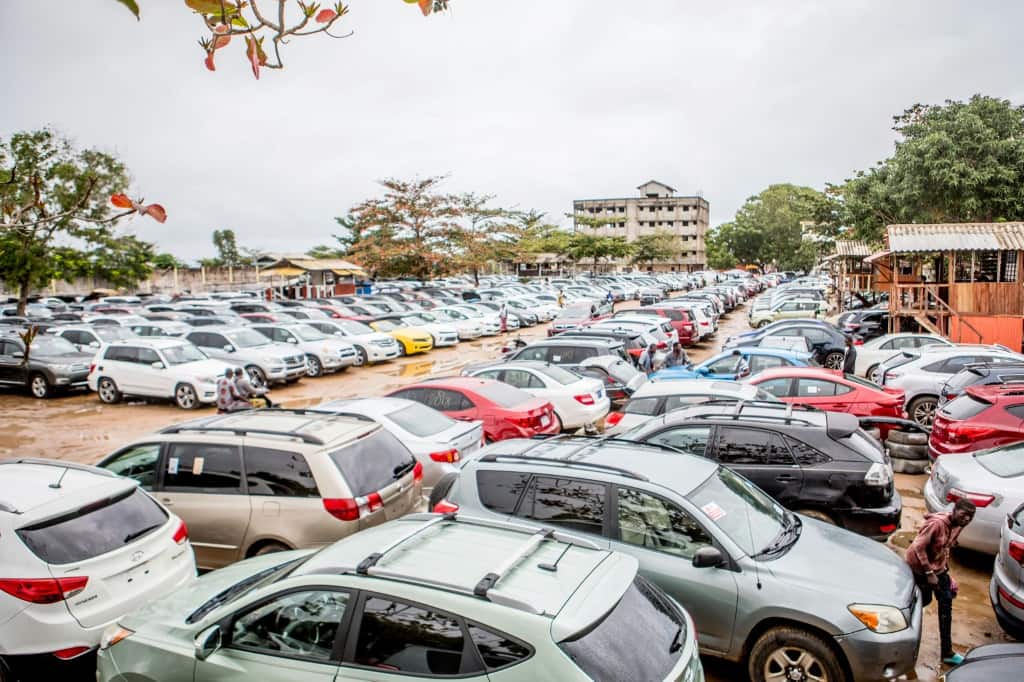 His Toyota Matrix has driven the equivalent of four times around the world and it would never pass an inspection in Europe.

But for its delighted new owner, Adam Adebiyi, the ageing hatchback with more than 170,000 kilometers (105,000 miles) on the clock may just as well have rolled off the factory floor.

Like millions of other Africans, the Beninese computer scientist has turned to the second-hand market to buy a quality car that would normally be well beyond his budget.

Africa is the world’s biggest destination for used vehicles.

More than a quarter of second-hand autos exported between 2015 and 2020, or 5.6 million vehicles, ended up on the continent, according to the UN.

These vehicles come mainly from Europe and Japan, and increasingly from South Korea or the United States, but are often very old or high-pollution models.

Adebiyi’s Matrix Toyota went into circulation in 2004 in Canada, before it was shipped by sea 15 years later to Benin, where it was purchased by a first owner, who then sold it to him.

Not far from the port of Cotonou, the economic capital of Benin, sales lots packed with second-hand vehicles, mainly from Europe, stretch for kilometres.

Benin is one of the five largest importers of used vehicles in Africa, according to a UN report published at the end of 2021.

The West African country has only 11 million inhabitants, but it is the gateway to the markets of Burkina Faso, Niger, Chad, and especially its giant neighbor Nigeria, the most populous country in Africa.

In one of these huge car lots near the border with Nigeria, Zakari Cisse recently sat with his hand on the steering wheel of his just purchased car, a model put into circulation in Belgium in 2002.

He would have liked to buy a new one from a dealership. But lacking resources, he fell back on this 20-year-old second-hand vehicle, which is “clean and well maintained”.

“The engine responds very well and you can tell by the noise,” he said.

“We don’t import rubbish,” said Ossama Allouch, an importer of used vehicles in Cotonou, who says vehicles are subject to controls before purchase.

“They are not just any vehicles that are banned from use.”

That’s quite a bargain in a country where a brand-new model will cost a dozen times as much, and the average salary is little more than $100 per month.

According to a United Nations Environment Programme (UNEP) report in 2021, most vehicles exported to developing countries are old, polluting, energy-inefficient, and potentially dangerous and undermine efforts to reduce carbon emissions.

During an inspection by Dutch authorities at the end of 2019 in Amsterdam port — from where boats transporting these cars to Africa leave every week — the average age of the vehicles waiting was 18 years and they exceeded 200,000 kilometres (120,000 miles) mileage on average.

No fewer than 93 percent were Euro 3 or lower — a category meaning they were marketed before the start of the 2000s.

Some of the vehicles had broken down and some had been stripped of their catalytic converters — attachments that reduce emission of polluting toxic non-carbon gases such as nitrogen oxide.

To filter the noxious gases, converters use precious metals such as gold, silver, rhodium and platinum.

Their value can exceed $100, providing a rich incentive for them to be removed and trafficked.

Amen Djidjoho, head of one of the sales parks in Benin, dismissed those concerns.

“All imported vehicles come with catalytic converters because in Europe and America, it is strictly forbidden to remove them,” he said.

To avoid converter theft after the vehicles have arrived, security guards watch over the assignments until they are transferred to Beninese sales parks, Djidjoho said.

Importer Ossama Allouch said converters are often stolen after the purchase, resold by owners or removed from garages.

Conservationists say pollution generated by these old vehicles is a major concern, given Africans’ thirst for a set of wheels.

Old cars, together with the poor quality of fuels used in West Africa, are “one of the main causes of the increase in air pollution levels in the cities of the region”, UNEP said.

“Children, who walk to schools and use busy roads, and informal vendors along these roads” are most at risk, it said.

Regulating this important sector of the Beninese economy and a major provider of jobs is predictably not an easy task.

The 15-member regional bloc Economic Community of West African States adopted a directive in 2020 aimed at bringing cleaner fuels and vehicles to the market, with implementation planned for January 2021.

Imported second-hand vehicles must in particular meet at least Euro 4 standards, which means they have been put into circulation after 2006.

But it is clear that in Benin, vehicles sold in car parks are much older.

Contacted several times, the Ministry of Transport had not answered AFP’s questions about legislation in force in the country.
(Africanews)