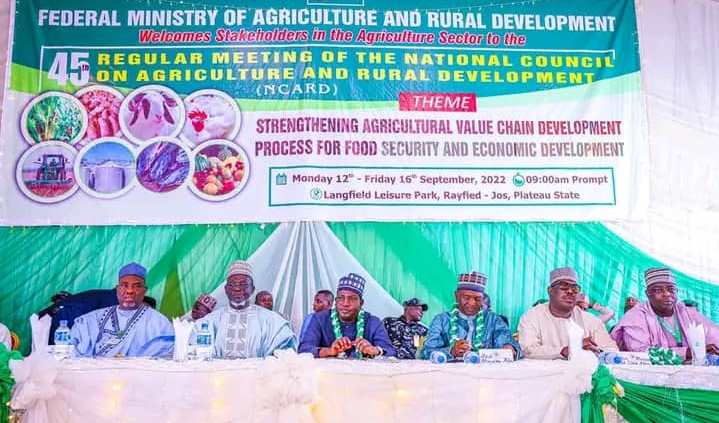 Plateau State Governor Simon Bako Lalong has said that investors ready to do business in the State, particularly in agriculture; manufacturing, and industry are assured of access to land and other incentives to support their endeavors.

Governor Lalong’s spokesperson, Dr. Makut Simon Macham in a statement on Thursday said the governor made the revelation while declaring open the 45th Regular Meeting of the National Council on Agriculture and Rural Development held in Jos, Plateau State.

According to the statement, Lalong said the meeting with the theme “Strengthening Agricultural Value Chains Development Processes for Food Security and Economic Development” addresses a very important aspect of the Nigerian economy and also touches on the challenge of turning agricultural products into real economic derivatives.

“I dare say that there is no better place to hold this event because Plateau State is an agrarian State with the potential to feed the nation and do so in style, using its exotic crops that are not grown in other parts of the country.

“There is no better time than now for stakeholders to convene a meeting to brainstorm on best strategies and policies to tackle hunger which is threatening the general well-being of Nigerians”.

The Governor said, his Government has over the last seven years given enormous attention to agriculture by ensuring the provision of farm inputs such as tractors, fertilizers, chemicals, improved seedlings, and many more towards ensuring that farmers benefit from the natural endowments of the State.

He further emphasized that farmers have been empowered through the Cooperative Societies and farmer associations in the production of many crops and assorted vegetables that are unique to the Plateau environment.

“For those who are ready for commercial farming, Plateau State has one of the most friendly business environments with mouth-watering offers for land acquisition.

“Indeed our land charges and ground rents which have been discounted several times are meant to serve as incentives for investors. Many who have taken advantage of this situation are reaping the fruits of their investments and expanding their businesses” he said.

Lalong expressed hope that with the designation of the Yakubu Gowon Airport Heipang as an International Cargo Airport, commercial farming of various crops, assorted fruits and flowers will expand in the state because of the possibility of direct export through the airport.

“The Government also recently bought over the Inland Container Terminal situated very close to the Heipang Airport which again compliments the evacuation of agricultural products from Plateau to other parts of Nigeria and abroad.

“On the issue of value chain addition to agricultural products which is the theme of the meeting, Lalong said: “I, therefore, challenge this Council to rise from this meeting with concrete and practical ways of ensuring that farmers add value to their products before selling them.

“This will not only boost the economic fortunes of the farmers but also birth a chain of Medium and Small Enterprises (MSEs), that will create jobs and usher in prosperity for our people.

“Many youths will be taken out of poverty and crime will fall because they will be engaged.

“As the Chairman of the Northern Governors Forum, I have also had an interface with the Federal Ministry of Agriculture and its Parastatals on the issue of Value Addition, Extension Services, and education as well as provision of timely farming input to our farmers.

“These problems cut across the States and entire country and need to be resolved without delay.

“We have to strengthen our agricultural research institutions and also challenge our Polytechnics and Universities to come up with machinery that will enhance value-addition in the agricultural sector”.

Minister of Agriculture and Rural Development Dr. Mohammad Mahmood Abubakar said the 45th Regular Meeting of the National Council of Agriculture and Rural Development provides an opportunity to address one of the major challenges faced by farmers relating to post-harvest losses and the inability of the farmers to benefit from the proceeds of their labour.

He said the Buhari administration has taken serious concern over diversifying the economy using agriculture and also ensuring that the processing of farm products is given a boost.

“This he said has resulted in strengthening rice, cassava, yam and other food production and processing that have yielded positive outcomes, adding that 10 rice processing Mills are about to be completed across the country”.

Also speaking, the Minister of State for Agriculture Mustapha Baba Shehuri also said the technical sessions at the Meeting have been robust and engaging with valid suggestions being made on how to address the challenges of agriculture in Nigeria.

Earlier, in their goodwill messages, Senate Committee Chairman on Agriculture Senator Bima Mohammed and his House Counterpart Munir Baba Dan Agundi expressed the willingness of the National Assembly to support the execution of projects that are capable of turning around agriculture for economic growth.

The development partners also highlighted the need for the 45th Council Meeting to generate outcomes that will increase the efficiency of the agricultural sector in the country.