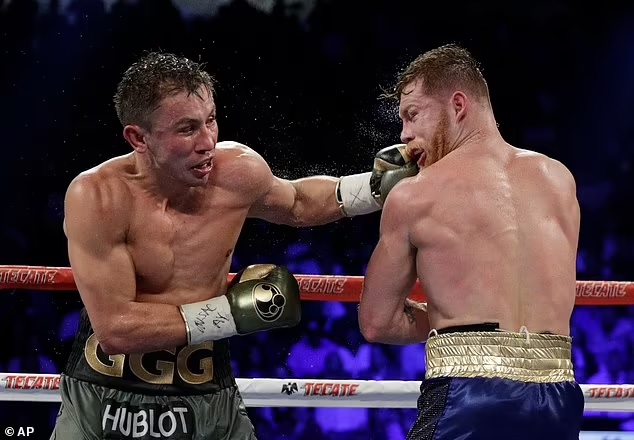 Saul ‘Canelo’ Alvarez is wary of the threat posed by “intelligent” Gennady Golovkin but plans to win their trilogy bout this weekend inside 12 rounds.

The Mexican, 32, puts his undisputed super-middleweight crown on the line against the Kazakh, 40, in Las Vegas.

Their first encounter in 2017 was a controversial draw, with Alvarez winning the rematch a year later.

“I’ll be looking to get the stoppage,” said Alvarez. “This is as edgy as I’ve been before a fight for a while.”

He added: “I work better under pressure. The pressure I put on myself is to finish this inside the distance. I have a tough rival in front of me but that will be my aim on Saturday night.”
Four-weight champion Alvarez – who turned professional aged only 15 – has won 57 fights, with two draws and two defeats.

Golovkin is the current unified middleweight champion, with those bouts with Canelo the only two blemishes on his 44-fight record.

‘This time it’s personal’
Alvarez-Golovkin is a rematch four years in the making and one of the greatest rivalries in the current era of championship boxing, with the two future hall-of-famers having already shared 24 controversial rounds in the 160lb middleweight division.

This contest is being fought at 168lbs (12 stones) and Alvarez weighing in at 167.4lbs with Golovkin the heaviest he has ever been for a fight at 167.8lbs.

“I know the undisputed championship is on the line and they really want to win that, but it’s just personal,” Hearn told the 5 live boxing podcast.

“Canelo cannot stand him. Gennady Golovkin says all sorts to the media and rarely says it to his face. Gennady is a bad man as well. He’s a very respectful and nice individual but trust me he has a bad side about him.”

Many fans and pundits believe Golovkin should have won their first bout at Las Vegas’ T-Mobile Arena – the venue of the trilogy fight – in September 2017.

Their rivalry and war of words further intensified when the rematch was delayed after Alvarez was banned for six months for failing two drug tests, which he said was caused by eating contaminated meat.

Alvarez and Golovkin eventually faced each other again 364 days after the first bout, at the same venue, with Alvarez edging a terrific fight by majority decision. The winner landed the more eye-catching shots, Golovkin the higher volume of punches.

Hearn predicts the third fight will be “the best of the three,” adding: “The first fight was epic. Canelo Alvarez chose to do the right thing and box and move. It was a very close fight.

“Then the second fight he came out and decided to walk down Gennady Golovkin. The punishment they both took in those fights was incredible. How they were both standing…”

Alvarez became the first undisputed super-middleweight champion by beating Caleb Plant in November, but is coming off a loss after being defeated by WBA light-heavyweight champion Dmitry Bivol in May.

“I’m really motivated to be here,” he said at Thursday’s news conference. “Obviously, the [Bivol] defeat hurt but we are back on the path to greatness.”

Hearn says his fighter is relishing the pressure and believes Alvarez will “bounce back” with a victory.

“If Canelo loses I think he’s in a terrible position coming off back-to-back defeats. He was pound-for-pound number one, all of a sudden, you probably put him outside of the top 10 if Golovkin wins,” Hearn added.

“It would be a very quick demise from that invincibility we believed he had in the sport. There’s a lot of pressure on him, but he’s really fired up.”

Since his last meeting with Golovkin, Alvarez has dominated the sport and become a pound-for-pound star, beating the likes of Sergey Kovalev and Britons Callum Smith and Billy Joe Saunders.

Golovkin’s career has stagnated a little over the past four years. He has competed just four times, compared to Alvarez’s eight. His best wins were against Sergiy Derevyanchenko and Ryota Murata.

He refused to offer a prediction or be drawn into conversation about their previous bouts.

“I think this is the biggest thing for boxing right now, the biggest gift for you, the fans,” Golovkin said. “I feel very comfortable. I feel strong, guys. See you Saturday night.”

However, his trainer Johnathon Banks quipped: “I have notified the Las Vegas Police Department’s robbery division to be on-site at T-Mobile Arena. Hopefully they can prevent a third theft by the judges.”