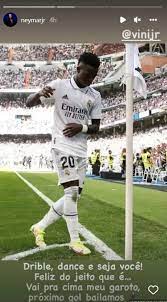 The Newcastle midfielder has been left infuriated after a Spanish football agent made a racist comment during a live television broadcast.

Newcastle star Bruno Guimaraes has called for a Spanish agent to be arrested after he told Real Madrid forward Vinicius Jr to “stop playing the monkey”, with Neymar urging his Brazil team-mate to keep on dancing.

The racist comment was made by Pedro Bravo – the president of Spanish football agents – during an appearance on the controversial El Chiringuito television show.

Bruno has since come out in support of his fellow countryman and called on the relevant authorities to take action.

He has said in a social media post: “This MORON needs to leave this place arrested! No excuses. If a guy says this on live TV, just imagine what he says when he’s not. Inconceivable if this guy is not jailed.”

Neymar also posted on social media, seemingly in reaction to the negativity surrounding Vinicius Jr’s choice of celebration, as he simply wrote in Portuguese: “DANCE VINI JR”. He added on Instagram: “Dribble, dance and be you! Happy just the way you are. Go for it my boy, next goal we dance!”

The Madrid star replied: “All the time!”
Racism in Spanish football has been a long-standing issue, with Vinicius himself having been targeted previously.

The Real Madrid forward claimed he suffered racist abuse during a Clasico clash against Barcelona in 2021, while in 2022 he was subjected to alleged racist chants from Mallorca fans – to which he responded by dancing in front of them after scoring.

Vinicius, who scored the only goal of the game as Real Madrid edged out Liverpool in the 2022 Champions League final, has been in fine form for the Blancos this season – with five goals and three assist recorded through eight appearances.
(Goal)

Banky W and Adesua share 1st photos of their son