Over 1,868 APC Supporters Defect to PDP in Sokoto 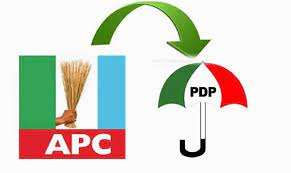 Over 1,868 businessmen and women of the All-Progressives Congress (APC) in Sokoto state have defected to the Peoples Democratic Party (PDP) .

They decampees in their comments said they defected to PDP considering the excellent leadership style of Governor, Aminu Waziri Tambuwal.

Speaking, on behalf of the decampees, Chairman, Furniture Makers Association, Alhaji Lawali Aminu Lalala said they were convinced and satisfied with the leadership style of the PDP administration in the State.

He said they were happy to partner with the Sokoto State Government in its effort to move the state forward.

He explained that the APC government they voted into office had failed them and entire Nigerians in all the sectors of human endeavor.

He promised their utmost loyalty and support to the PDP and promised to cast their votes for the candidates of the party in the forthcoming 2023 general elections.

Receiving the decampees, the Sokoto State Chairman of the PDP, Hon. Bello Aliyu Goronyo who was represented by the zonal chairman, Sokoto Centra,l Alhaji Muhammadu Dangoggo assured them that they are now full members of the PDP and they are equal with other members.

He promised to carry them along and called on them to use their wealth of experience in politics and business activities to ensure the success of the PDP candidates during the 2023 general elections.

In his remarks, the Sokoto State PDP gubernatorial candidate, Malam Sa’idu Umar Ubandoma welcome them and assured them of equal treatment with the old PDP members.

Ubandoma promised to carry them along during and after the campaign.

He called on the new members to work hard and ensure the success of all PDP candidates in the 2023 general elections.