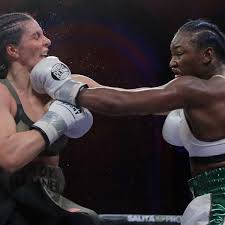 It is a new day of the new month and the month looks good for the boxing world. All is now ready for the biggest fight cards in the history of Women’s boxing. Claressa Shields and Savannah Marshall are set to collide.

Shield went 77-1 as an amateur and is currently the only female boxer to win undisputed titles in two weight classes. The heated rivalry will come to a head on Saturday, September 10th, 2022 as part of a historic championship doubleheader.

The big doubleheader event, also featuring Mikaela Mayer vs Alycia Baumgardner, will be taking place at the O2 Arena in London, England.

On 17 September, we will watch two of the boxing best. Saul ‘Canelo’ Alvarez and Gennady Golovkin will complete their incredible trilogy as Las Vegas hosts the huge title fight.

The great foes battled out two thrilling clashes in 2017 and 2018 with the first being ruled a draw before Canelo took the second.

Their rivalry has been one of the best in modern-day boxing but fans have had to wait for a third and final clash.

On come 17th of September, they will go toe-to-toe once again under the lights in Sin City and it would definitely be a thriller.

Canelo, who lost to Dmitry Bivol in his WBA light heavyweight title bout in May, will put his super middleweight titles on the line.

Golovkin has only fought four times since his defeat to the Mexican and beat Ryota Murata in Japan most recently.

Closer than expected is the fight between ‘The Destroyer’ and ‘The Real King Kong’ this Sunday in California. Will Ruiz or Ortiz walk away with the title? How much will each make? While both fighters have a fair chance at walking away with a title shot.

‘’The Destroyer,’ has been away from the ring for 16 months, with his last fight against Chris Arreola won on points where the Mexican-American bagged himself $1 million for that bout. Since then, Ruiz has been staying in great shape, with hopes to secure another world title shot at 32 years old.

On the other hand, Ortiz, aka ‘The Real King Kong,’ had his last fight against Charles Martin eight months ago, where he made a reported $1.5 million, as per Total Sportal.

‘One month ago he was a disaster, now he’s going to break every record’- Pep Guardiola