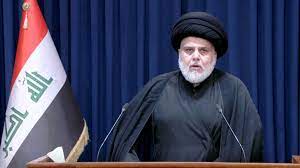 Iraq’s powerful cleric Moqtada al-Sadr ordered his followers to end their protests in central Baghdad on Tuesday, easing a confrontation which led to the deadliest violence in the Iraqi capital in years.

Apologizing to Iraqis after 22 people were killed in clashes between an armed group loyal to him and rival Shi’ite Muslim factions backed by Iran, Sadr condemned the fighting and gave his own followers one hour to disperse.

“This is not a revolution because it has lost its peaceful character,” Sadr, a former anti-U.S. insurgent leader, said in a televised address. “The spilling of Iraqi blood is forbidden.”

As the deadline passed at around 2 p.m. (1100 GMT), Sadr’s followers could be seen beginning to leave the area in the fortified Green Zone in central Baghdad where government offices are located and where they had occupied parliament for weeks.
Monday’s clashes between rival factions of Iraq’s Shi’ite Muslim majority follow 10 months of political deadlock since Iraq’s October parliamentary election, which have raised fears of escalating unrest.

Sadr emerged as the main winner in the election but failed in his efforts to form a government with Sunni Muslim Arab and Kurdish parties, excluding the Iran-backed Shi’ite groups.

This week’s violence erupted after Sadr said he was withdrawing from all political activity – a decision he said was prompted by the failure of other Shi’ite leaders and parties to reform a corrupt and decaying governing system.
An Iraqi government official, speaking on condition of anonymity shortly before Sadr’s address, said authorities could not impose control on the rival armed groups.

“The government is powerless to stop this, because the military is divided into (Iran) loyalists and Sadrists as well,” the official said.

Sadr’s actions follow a pattern of confrontation and de-escalation he has deployed since he rose to prominence after the U.S.-led invasion which toppled Saddam Hussein in 2003, said Hamdi Malik, a specialist on Iraqi Shi’ite militias at the Washington Institute.
He said the cleric has recently tried to avoid violence in order to bolster his credentials as a leader of the country’s oppressed masses, but has in practice had to threaten violent disorder to get what he wants.

Caught between political or religious ambition and his role as head of a militia, “Sadr has always put himself and his followers in a situation where violence and bloodshed seems inevitable, but then he always turns round and rejects the violence,” Malik said.

OIL EXPORTS FLOWING
Earlier on Tuesday militants fired rockets at the Green Zone and gunmen cruised in pickup trucks carrying machine guns and brandishing grenade launchers, while most residents observed a curfew which was lifted after Sadr’s statement.

The United States described the unrest as disturbing and called for dialogue to ease Iraq’s political problems.

Neighbouring Iran briefly closed the border and halted flights to Iraq, less than three weeks before the Shi’ite ritual of Arbaeen which draws millions of Iranians to the Iraqi city of Kerbala. It later reopened the border.

Emirates airline and flydubai cancelled flights to and from Baghdad on Tuesday and Wednesday, but sources said oil exports from OPEC’s second-largest producer were unaffected by the turmoil.
Sadr has positioned himself as a nationalist who opposes all foreign interference, whether from the United States and the West or from Iran.

He commands a thousand-strong militia and has millions of loyal supporters across the country. His opponents, longtime allies of Tehran, control dozens of paramilitary groups heavily armed and trained by Iranian forces.

“There are uncontrolled militias, yes, but that does not mean the Sadrist Movement should also be uncontrolled,” Sadr said in his address calling off the protests.
(Reuters)