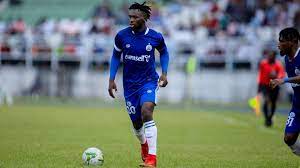 Nigeria begin their campaign for a place in Algeria 2023 African Nations Championship against Ghana.

The Super Eagles would be hoping for a favourable away result at the Cape Coast Sports Stadium towards making the reverse fixture a mere formality.

Below is how Salisu Yusuf’s men would start the showdown against their West African neighbors.
Goalkeeper – Adeyinka Adewale
Akwa United’s Adeyinka Adewale will start in goal for the Super Eagles at the expense of experienced Ojo Olorunleke.

Defender – Tope Olusesi
Aside from captaining the Super Eagles against the Black Galaxies, the Rangers defensive stalwart would he hoping to stop the hosts’ strikers from wreaking havoc.

Defender – Ebube Duru
Still fresh from winning the NPFL title with Rivers United, he is expected to hold sway in Nigeria’s backline.

Defender – Hafeez Nosiru
Although relatively unknown, the Kwara United star has earned a place in the starting XI ahead of Remo Stars’ Issa Ali.
Defender – Tosin Adegbite
Blessed with a good pace and a foot that packs a missile, the Enyimba man would be hoping to bring his experience with the Aba Elephants to this crucial encounter.

Midfielder – Joseph Onoja
Considered as one of the best midfielders in the Nigerian top-flight, the Rivers United man would be counted on to supply killer passes.
Midfielder – Samson Gbadebo
Gbadebo is not new when it comes to national team assignments. His creativity will be crucial in this cracker at the Cape Coast Sports Stadium.
Midfielder – Chijioke Akuneto
The Rivers United man will operate from Nigeria’s right flank and his speed is expected to cause some problems for the Ghanaian defenders.

Midfielder – Adams Yakubu
The Akwa United man has been handed a Super Eagles debut. He would be hoping to make that count with an impressive display in Cape Coast.

Striker – Babatunde Bello
On a good day, Bello is expected to cause defenders some trouble. He could make the difference if given the needed supplies.

Striker – Andy Okpe
Okpe played a crucial role in Remo Stars’ qualification for this season’s Caf Confederation Cup. He is expected to get on the scoring sheet on Sunday evening.

ASUU: Desperation Driven by the Dearth of Decorum

BBNaija S7: Amaka has been issued a strike