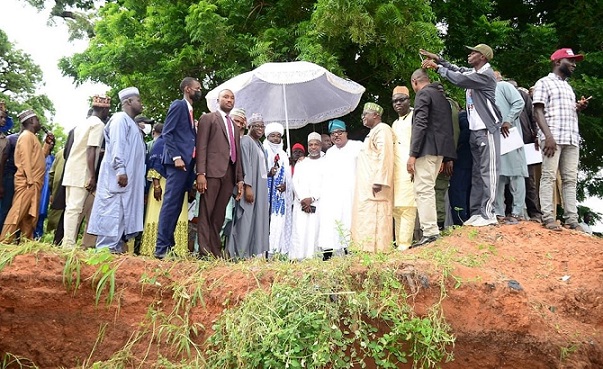 The Governor commended the commission for working in partnership with the Government in bringing desired succor to the people.

The Chief Press Secretary to the Deputy Governor, Modupe Joel quoted the governor in a statement on Friday saying: “This feat is highly commendable and you may wish to look into those areas with hydro-electric installations across the State that are being threatened by these adverse environmental factors and work in partnership with our government in bringing desired succor to the people.

“The issues are caused and accelerated largely due to human factors ranging from excessive wood logging for commercial purposes, charcoal production and so on and of course other natural factors like climate change and global warming.”

According to the statement, AbdulRazaq who was represented by the Deputy Governor, Mr Kayode Alabi, disclosed that the administration had intervened in different environmental management activities to safeguard the environment.

The Governor said  Said: “Within the year 2020 till now our government has intervened in different environmental management activities ranging from advocacies and sensitizations across the State; also in radio and television stations, dredging and building of embankments for flood and erosion control in some parts of the State, including the Capital, massive tree planting exercises and afforestation campaign across the State, partnerships with relevant Civil Society/Non-Governmental Organizations and many more.

“Interventions such as tree planting campaign for afforestation would be highly recommended as it would break heavy wind and reduce heavy flows of water during precipitations that wash away the soils and lead to gully erosions”.

Senator representing Kwara North Senatorial District Senator Sadiq Umar promised to go beyond legislative interventions to support HYPPADEC in making impacts on the lives of the people and communities within its areas of responsibility.

In his remarks, Etsu Patigi Alhaji Ibrahim Umar Bologi II said the erosion control project would reduce the suffering of the people of Patigi Emirate and protect their lives and properties of the people.

“The construction of this erosion project will reduce the sufferings of our people and also protect the lives and properties of our people.

“I want to appreciate the state government, Senator Sadiq Umar, and the HYPPADEC for continue supporting the people of Patigi in reducing their suffering. This is a teamwork and the management of HYPPADEC has deemed it fit to assist us,” the monarch said.

“Among other things, for example, it causes deterioration of roads and other critical infrastructure like the General Hospitals, Patigi.

“The importance of this project can, therefore, not be overemphasized.

“This is more so because the environmental hazards about to be tackled possess threats and cause distress not only to the inhabitants of the residential areas around the General hospital but also to the multiple patients from the neighboring communities in Kwara as well as Niger and Kogi States.”

Yelwa charged all members of Patigi community to contribute their respective quota towards ensuring good maintenance of the drainage system about to be constructed, saying that the adverse environmental effects of poorly maintained drainage systems and poor waste management habits are almost equal to the effects of their complete absence.

“Permit me Your Excellency at this juncture, to extend our profound appreciation to members of the National Assembly from the HYPPADEC States for their commitments and dedication in seeing that HYPPADEC receives the proper and adequate support as provided in the enabling Act establishing the Commission.

The pioneering efforts of Senator Sadiq, your dynamic, young and hardworking Senator in seeing that HYPPADEC receives the necessary lifeline is highly appreciated,” he added.

The flag-off ceremony was attended by members of the State Executive Council including Commissioners for Environment Remilekun Banigbe; Commissioner for Housing and Urban Development Architect Aliyu Muhammad Saifudeen and Commissioner for Energy Mariam Ahmed Hassana.

An agenda for national rebirth (3), by Hassan Gimba

USAID Donates Teaching Aids to SSCS, Others in Sokoto

Mottainai to Set Up Recycling Hubs Across Oyo State