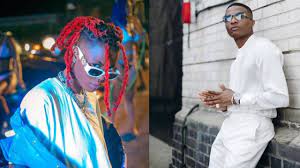 Fast rising female rapper, Candy Bleakz, has revealed that superstar singer, Ayodeji Ibrahim Balogun also known as Wizkid supported her with the sum of N20 million.
The rap artiste made this known in a video she posted on social media while thanking Starboy for the funds.

According to Candy, he gave her the N20 million for her to shoot music video for the remix of her song, Tikuku.

Candy urged fans to thank Wizkid on her behalf and prayed for God to bless him abundantly.

She said; ”A very big thank you to Wizkid, Wizzy babanla. Wizkid just gave me 20 million naira to use to shoot Tikuku remix. Make una help me thank Wizkid o.”

Sharing the video, Candy Bleaks tagged Wizkid with the caption; ”Thanks @wizkidayo”

Fans took to social media to express doubt over her claim as there is the impression that she was just ‘cruising’.

Interestingly, this comes after content creator, Oderhohwo Joseph Efe, popularly known as Carter Efe revealed that he was given N10 million to shoot the video for Machala.
(Gistlover)