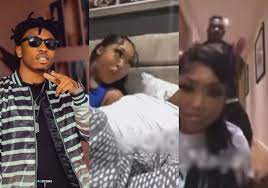 Nigerian singer, Adewale Mayowa Emmanuel alias Mayorkun has broken his silence following a video of himself with his alleged girlfriend.

WITHIN NIGERIA recalls that the ‘Certified Loner’ crooner was spotted with the famous dancer, Cocainna having their best time.
The clip which was segmented into two parts first captured the duo lying on a bed while the second part showed the duo singing and dancing to a song.

Captioning the video, an IG blogger identified as Olofofonaija claimed that Mayorkun is currently dating Cocainna which sparked mixed reactions from netizens as they questioned his relationship with his initial and known girlfriend, Betty.

Reacting Mayorkun took to his Snapchat handle to speak as regards the viral clip. He slammed cybercitizens for trying to know everything concerning his private life.

EVERYBODY WANTS TO KNOW SOMETHING, GET THE FU*K OUT!!!
(Gistlover)

‘Feeling like prisoners’: The plight of Rohingya refugees today