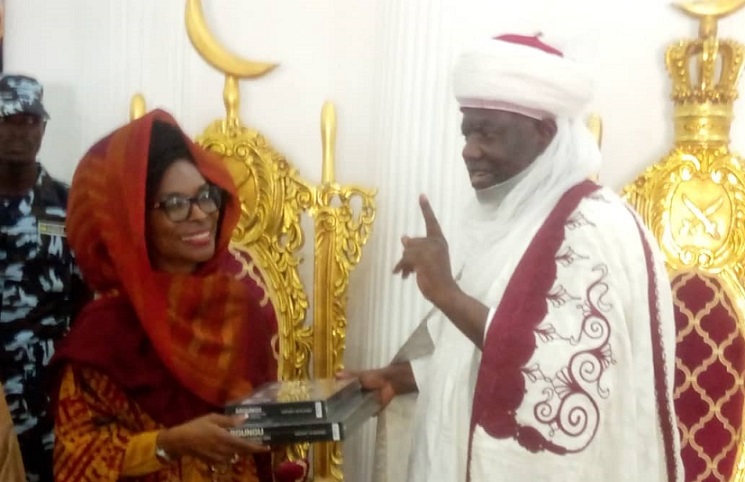 Dr Emem Omokaro, the NSCC Director General made the plea during a courtesy visit to the Emir of Argungu, Alhaji Sama’ila Muhammadu-Mera in his palace in Argungu, Local Government Area of Kebbi State.

The courtesy visit was a familiarization to traditional institutions to acquaint them with the activities of the centre and seek their support, cooperation and blessings.

NSCC is a statutory agency established by the National Senior Citizens Act of the National Assembly to cater for the needs of the ageing and old persons in Nigeria which was recently signed into law by President Muhammadu Buhari.

The DG appealed to the Emir to use his royal position to influence the Kebbi State Government to domesticate the National Senior Citizens Center Act through the State Assembly.

“Sir, we hope that the Emirate under your leadership will help us influence the government to domesticate the National Senior Citizens Center Act, in giving it to the State Assembly, am sure they will be able to bring in all the cultural context to make it Kebbi State-owned and also evolve a state policy on ageing,” she pleaded.

She observed that the sustainability of the program depended on policy, plan and strategy as well as the political will to properly integrate the older persons into the scheme.

“NSCC is a focal agency for ageing and issues of older people, there is also the National Policy on Ageing, which was approved by the National Executive Council. So, for the first time in this country, we have a policy framework, a legal framework and a focal agency to really take care of the challenges of older people, it has never happened before.

“Elders in Nigeria will work, spend their lives, give up their experiences and expertise and in their later years after they have retired, they are not included in the development plan. Now, for the first time, issues and challenges of old people are part and parcel of development.

“So, Your Highness, we came here to tell you that the NSCC is for all citizens wherever they are, most especially the very vulnerable and the poorest of them who are in the local government and very hard to rich places, the NSCC Act recognized the three tiers of government,” she noted.

The DG noted that the Act mandated the centre to make efforts to promote and maintain linkages with states and local governments in view of the fact that 70 per cent of those older persons lived in rural areas.

In the development of the centre’s policy and strategy, she said, “royal fathers and traditional institutions are very significant and very critical. So, in any of our approaches to states, we must visit traditional rulers to tell them they have a role to play because of their influence not only as traditional but also as spiritual fathers.”

She said the NSCC by mandate was to identify the challenges of senior citizens, especially in the area of health, adding that he had a critical role to play being the Chairman of, the Northern Traditional Rulers Committee on Health.

Omokaro said one of the cardinal programs of the centre was the mainstreaming of geriatrics care into primary health, saying, their desire was for any older person working in any primary health facility to be treated as geriatric.

While advocating those human resources had to be developed in geriatric care, the DG advised that extension workers needed to be trained.

Responding, the Emir of Argungu, Alhaji Sama’ila Muhammadu-Mera appreciated the centre for the visit, assuring maximum support and cooperation of traditional institutions towards the success of the centre.

He said: “I am so delighted to have the privilege of receiving this very important group representing me, my mother, who is still alive.

“Honestly, I am so delighted and moved, finally-finally, our country is turning around to look after not the vulnerable but the most valuable asset that we have, I won’t call our elders vulnerable.

“The greatest asset of this country is not the oil, is not agriculture, is not gold and diamond under the surface of the earth but the elderly who have only a dream of the best for us. I am delighted again this centre will be representing those people because my mother is still alive living with me, I, sometimes have a feeling among those you call young men.”

The Emir applauded President Buhari, the National Assembly, and other stakeholders who facilitated the actualization of the Act.

He appreciated the efforts of the Director General, her management team, and all other stakeholders for not only providing a foundation that strengthens the take-off of the centre but also respecting the old, protecting the old, and looking after the old.

The Monarch lamented that in Africa the health and welfare of the old persons had been neglected, assuring that a child would be irresponsible if he abandoned his elders, and his parents.

“What do you call a country if it forgets and never plans for its elderly ones? The white people have served it with all they had,” he added.