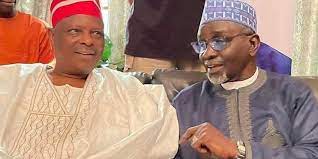 Since last week, when news began to filter in, to the effect that the recently fabricated fellowship between Mallam Ibrahim Shekarau and Eng. Rabiu Musa Kwankwaso has commenced collapsing, my mind started indulging in unpalatable recollections of the past, going back and forth on the content of an article I wrote on the 18th of this month, titled, SHEKARAU/KWANKWASO: THE FUTILITY OF THE FRATERNITY.

The signal of the failure of the fraternity began blinking when some close associates of Mallam Ibrahim Shekarau, started complaining of marginalization in the alliance that made Shekarau cross over from the All-Progressive Congress, APC, to the New Nigerian People’s Party, NNPP, accusing Kwankwaso of reneging on some terms of the agreement.

Kwankwaso quickly went on air through the Hausa service of the BBC, to debunk the rumour circulating that the two of them have grudges, saying the only problem if any, is that as a party, the NNPP could not meet only one of the requests made by the camp of Malam Ibrahim Shekarau.

“There is no agreement that was not fulfilled other than that of contestants. We have tried our best to honour the agreement but time couldn’t permit us. Most of the people brought by Shekarau’s side to get tickets for elective positions joined the NNPP at a time when INEC would not accept their candidacy. However, if the party wins the election and forms a government, Shekarau’s associates would get more prestigious positions. This would not cause any problem in the NNPP, and there is no problem between us”.-Kwankwaso.

But the bubble busted fully yesterday, Monday, when Mallam Ibrahim Shekarau addressed the press, saying he was not only disappointed by Kwankwaso but thoroughly humiliated, promising to announce his final decision of defection in a few days.

In analysing the circumstances that brought about his fury, Mallam Ibrahim Shekarau, a two-term governor of Kano state, the Sardaunan Kano, and the present Senator representing Kano Central, said so many things, including the various meetings he had with Kwankwaso on the need to accommodate his associates, which was agreed upon with the setting up of a committee, under the chairmanship of Abba Yusuf, the Kano state gubernatorial candidate of the NNPP. But Kwankwaso refused to honour everything.

“Kwankwaso kept deceiving me and only for him, to later say we are late for my supporters to be on the list, and there was nothing he could do. For over three months, the committee set up could not do anything about attending to our proposal. I will never be a party to injustice. My integrity is of utmost and not any political position that will make me compromise it and that of my people.

“I am a man of honour and integrity but his governorship candidate (Abba Yusuf), who was given the responsibility to look at areas to accommodate my people into various elective positions, never for one single day do so or even call for a meeting, let alone accepting my supporters to contest. Nobody will use the money to change my conscience. I was a governor for eight years in Kano and people believed in my integrity. I am still living in a rented house in Abuja and never allocated a single plot of land to myself when I served as Governor in Kano, and I challenge anyone who knows my plot of land to expose it”-Shekarau.

Yes, many, including yours truly, believe Mallam Ibrahim Shekarau is a man of honour and credibility. He was my teacher, and I hold him in esteem for a number of reasons, that include his quality of being honest and having strong moral principles. Mallam Ibrahim is also excellent in dictum, with the capacity for the fluidity of speech in a multi-lingual manner. But like President Muhamammadu Buhari, Mallam Ibrahim is easily credulous. He has the weakness of having the readiness to believe things too easily. This is a minus.

The failed fraternity with Kwankwaso has exposed the credulity of his gullibility, with the potential of throwing spanners in the works of his future political carrier. Yes, depending on how well his image managers work, his political future may be marred by the coming of questions, relating to deviousness and untrustworthiness. And for a politician with such excellent antecedent and polished political profile, it would not only be a disaster, but a dreadful legacy to bequeath.

Mallam has promised to announce his final decision of defection in a few days, and the speculation in town is that he is being cajoled to join the PDP. But here also, I want him to be cautious, and weigh all the options thoroughly. If he likes, think from top to bottom, before arriving at a decision.

Some may think I used the phrase, “top to bottom”, on purpose, to sway or persuade Mallam to go in the direction of the person that popularized it. Well, the answer can be Yes and No. Indeed, I have my bias, which is the desire to stop Mallam from being politically ridiculed, or made more credulous and gullible, through dishonest invitations, that may end up in failed fraternities.