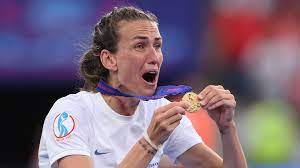 The midfielder confirmed on Tuesday that her time in the game has come to an end. Scott won trophies at Everton, Manchester City and England, culminating in her Euro 2022 success this summer.

WHAT THEY SAID: “Right, we’re not crying. I promised myself. I’m retiring from football. And I’m leaving with a gold medal swinging from my neck,” Scott said in a post on Twitter, adding in a column for The Players’ Tribune:
“Today, I may be saying my goodbyes to football, but we’re going to make this a celebration. No sad faces!! We’ve had too much fun for any tears.”

THE BIGGER PICTURE: Scott is the second Lionesses hero to announce her retirement this week, following Ellen White.
Professional career began with Sunderland, where she spent two years as a senior player before joining Everton. She won the FA Women’s Premier League Cup and FA Women’s Cup in a seven-year spell at the Toffees and was then snapped up by Manchester City in 2013.

As well as another trophy-laden spell at the Blues, she helped England to third place at the 2015 World Cup and finished her career with glory as the Lionesses claimed the European title this year.

The 35-year-old has not said what she will do after hanging up her boots. She could move into coaching to put her experience to good use or she may walk away from the game entirely to pursue other ventures.
(Goal)