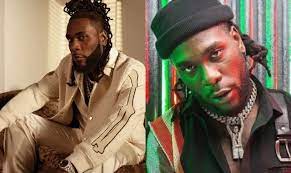 Burna is trending on Twitter after comments he made about Wizkid FC on the microblogging platform.

He reacted to an interview by Wole Soyinka, where he raised concerns over the removal of history from the Nigerian curriculum.

Soyinka said he was not in support of the elimination of history from the Nigerian curriculum, adding that he was unaware that the subject had been dropped for a while.

Burna then quoted a video of the interview and lambasted Wizkid FC for criticizing him when he talked about the same things.
The singer then mocked Wizzy’s fans by saying that if their real history was taught in schools, Wizkid would have a smarter fanbase.

He tweeted; ”… I said this same thing a while ago but Wizkid Delusional Twitter fc said I was lying. Maybe if your true history was taught in your schools Wizkid would have a smarter Twitter FC instead of idiots like this.”

”Whether you know it or not, All our suffering stems from our miseducation. We do not know who we truly are or the strength we truly have,” he added.

In reaction to his tweet, a man posted screenshots of alleged posts by rappers, Offset and Stefflon Don talking about him in a not-so-pleasant way.

But he responded to the post by saying that it was the same fans of Big Wiz that doctored the images.

”Nope this was all doctored and done by Wizkid delusional Twitter fc,” he said.
(Gistlover)