Angola voters despondent in run up to general elections 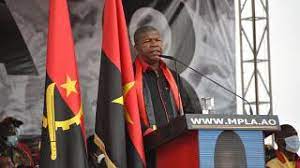 People in the streets of the township of Viana one of the areas in and around Luanda, say there’s no need to vote come Wednesday August 24, as they see no change and continue to have no jobs.
The landmark election with more than 14 million registered voters are registered has been described as an “existential moment” for the key oil-rich central African state.

With an oil-dependent economy in recession, current President Joao Lourenço has launched ambitious reforms to diversify revenue sources and privatize public enterprises.
But very little has changed for the majority of Angolans. The discontent with the ruling People’s Movement for the Liberation of Angola (MPLA) party is huge. Some of the population are turning away from politics.

“We have no family that can help us grow, even after university you end up in the informal market selling things, every time paying school fees, but after school they have nowhere to go, they stay at home, so if you ask me to vote I have no one to vote for, because even if I vote no one will help my son in life.” Madalena Mondole, a street vendor told our correspondent.

President Joao Lourenço is seeking a second term in the general election on Wednesda. His country, a former Portuguese colony is rich in natural resources but plagued by corruption, with much of its population living in poverty.

“We are not satisfied or happy with the government’s actions, we expect more from them.” says Pedro Simao, a resident of Luanda.

Interrupted in 1991 by the Treaty of Bicesse (Portugal), the war resumed in late 1992. Despite the signing of peace agreements in 1994, the conflict continued.

In 2002, after the death of the historic leader of Unita, Jonas Savimbi, the army and Unita signed a cease-fire.

José Eduardo dos Santos came to power after the death of President Neto in 1979.

His opponents accuse him of having cut the state and the economy in half, offering his family and friends key positions.

His successor is Joao Lourenço, who came to presidential power in 2017. Lourenco has since launched an anti-corruption campaign to recover billions suspected of having been embezzled during dos Santos’ presidency.

The current head of state has dismissed the relatives that dos Santos had placed, including his daughter Isabel, Africa’s first female billionaire, who has been accused of corruption by the judiciary and by the “Luanda Leaks.”

The former president’s son, Jose Filomeno, was sentenced in 2020 to five years in prison for embezzling money from Angola’s sovereign wealth fund, which he oversaw until 2018.

Angola is the second largest oil exporter in sub-Saharan Africa, but it produces only about 20% of the refined products it needs. Black gold accounts for nearly 95% of its exports (World Bank).

For a decade after the civil war, Angola enjoyed double-digit growth thanks to the oil bonanza, but the price collapse in 2014 blew up that model, leading to several years of recession.

To revive the economy, the current president has launched a diversification plan to move away from all-oil and initiated privatizations. Angola is also one of the world’s leading diamond producers.

Despite its wealth, nearly half of the population lived on less than $1.9 a day in 2020 (World Bank).
(Africanews)