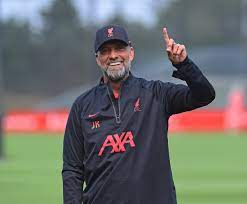 Jurgen Klopp believes Liverpool should be given the points should their clash against Manchester United at Old Trafford be postponed by protests from fans.
According to social media activity, fans of the Red Devils are planning fresh protests against the ongoing Glazer ownership of the club, which has recently been thrown into doubt after British Billionaire Sir Jim Ratcliffe announced that he plans on bidding for the club. T

he fixture on August 22 is set be the stage for a mass walkout by fans as they try and capitalise on developments in recent days.

In May 2021, fans stormed the stadium, gaining access to the Old Trafford pitch and attempted to enter the changing rooms in protest of the Glazer’s role in the formation of the failed European Super League. Liverpool eventually won the fixture 4-2, helping them secure Champions League football the following season.

What happens if the game is postponed?
Speaking in a press-conference, Klopp said: “I really hope it will not happen, but if it happens, I think we should get the points.

“We have nothing to do with the situation. If that happens and the supporters want the game to be not happening then we can’t just rearrange the game then fit it in somewhere in anyway in an incredibly busy schedule.

“I don’t think and I really hope this will not happen. I have no idea what could happen, I don’t think about it. People tell us we are fine so we go there and play the game, hopefully, and go home. In a situation like this always the other team should get the points because they have nothing to do with it.”
(Goal)

‘I have the experience to lead Kano people’, says Gawuna