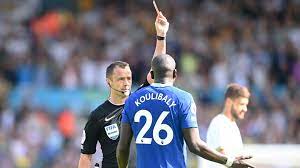 Kalidou Koulibaly was given his marching orders in Chelsea’s 3-0 defeat to Leeds United in Sunday’s Premier League fixture.

The centre-back was dismissed by referee Stuart Attwell in the 85th minute for a second caution.

Koulibaly – who has impressed since joining the Blues from Napoli – was first cautioned in the ninth minute after a blatant shirt pull on Brenden Aaronson.
And with five minutes left on the clock at Elland Road, the Senegal international was shown the way out.

The center-back deliberately pulled Joe Gelhardt down after the striker skipped past him and Attwell had no choice but to give him his marching orders as Thomas Tuchel’s men were reduced to 10 men.

Since the start of the 2017-18 season, Koulibaly has been sent off six times in Serie A and the Premier League combined – the most for any player in the big-five European leagues in this time.

Prior to his dismissal, fans had hit out at him for putting up a woeful performance at Elland Road.

Goals from Aaronson and Lucas Rodrigo Moreno gave the home team a 2-0 lead into the half-time break.

Moreno set up Jack Harrison in the 69th minute to leave Tuchel’s side with no hope of attempting a comeback.

With no goal, Chelsea returned home empty-handed – recording their first defeat of the 2022-23 campaign.

His compatriot Edouard Mendy was in action from start to finish with Hakim Ziyech replacing Jorginho four minutes after the hour mark. Regardless, the Morocco international could do little to rescue the two-time Uefa Champions League winners.

Following this embarrassing result, Chelsea dropped to 12th in the English top-flight log having accrued four points from three matches as Leeds climbed to second with seven points.

Koulibaly is expected to miss the Londoners’ next outing against Leicester City on August 27.

After his first game for Chelsea, the defender confessed that he is not used to the Premier League’s rhythm yet.

“It was a tough game and my first game in the Premier League,” the Lion of Teranga skipper said as quoted by the club’s website.

“It was a difficult [outing] because I am not used to the rhythm but I tried my best, and we won the game, and I am so happy to win my first Premier League game. I am looking forward to winning many more games with my team.”
(Goal)