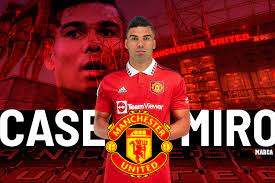 Manchester United have completed the signing of Casemiro from Real Madrid as the Red Devils look to change their fortunes round following a rocky start to the season. Casemiro won five Champions Leagues in a nine-year spell with Los Blancos and Erik ten Hag will be hoping the Brazilian can bring some much-needed experience to the United midfield.

How much have Man Utd paid for Casemiro?
Man Utd have shelled out £60 million (€70m/$70m) on Casemiro, making him their sixth most expensive signing ever.
He comes in behind Angel Di Maria, who also joined from Real Madrid in 2014, but left the club a year later to join PSG.

The deal includes potentially £10m ($12m) in add-ons which would take the fee to £70m ($83m) and make him the fifth-most expensive signing, above Di Maria.

What is the length of Casemiro’s contract at Man Utd?
Casemiro has penned a four-year contract at Old Trafford, with the potential of another year.

His wages will increase, and while it won’t quite reach double what he was on in the Spanish capital, he will still be among United’s top earners.

What has been said about Casemiro joining Man Utd?
Manchester United have expressed their delight at signing Casemiro.

Real Madrid confirmed the deal, and included an emotional tribute to the Brazilian. They listed his honors while at the Spanish giants, which included five Champions Leagues and three La Liga titles.

They said: “Casemiro will always represent the values of our club. An exemplary player who has given everything for Real Madrid.

“Real Madrid is and will always be his home, and we wish him and his whole family the best of luck in this new stage of his life.”

Casemiro is due to bid farewell to the club on August 22 in a press conference at Real Madrid City.

Why have Man Utd signed Casemiro?
Manchester United have been looking to reinforce their midfield all summer, with number one target Frenkie de Jong seemingly not wanting to leave Barcelona.

In recent weeks, interest has turned, with Fabian Ruiz and Adrien Rabiot reportedly being lined up by United. However, French heavyweights PSG look set to sign Ruiz while Rabiot was reportedly asking for huge wages in order to join the Red Devils.

Ten Hag has decided he can’t rely on Scott McTominay and Fred for the remainder of the season so has stepped up his pursuit for a midfielder after so many setbacks.
Casemiro brings experience and quality to a position Man Utd are lacking options in.

How will Man Utd line up with Casemiro?
Casemiro will most likely be asked to sit at the base of midfield and help protect the back-four – the position he has occupied during his time in Madrid. Currently Ten Hag’s squad appears to be lacking a player who is a natural in this position, so Casemiro will almost certainly have an impact.

He will be hoping to strike up a partnership alongside his international compatriot Fred, as well as Bruno Fernandes and Christian Eriksen.
They will be hoping that Casemiro’s vast experience takes the onus off of them defensively and allows them to utilise their attacking talents.

The Red Devils are looking to further strengthen their squad, with Barcelona full-back Sergino Dest on their radar as well as Yannick Carrasco. United have looked at Carrasco’s Atletico Madrid teammate Matheus Cunha as well but it is believed a nine-figure sum may be needed to lure the Brazilian to Old Trafford.

Dutch winger Cody Gakpo of PSV is heavily linked with the Manchester club, along with Antony of Ajax. The latter is thought to be valued by his club in excess of £90m ($106m), perhaps putting off interest from United.