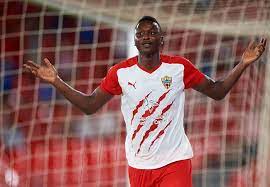 The Super Eagle played a vital role last season to help the team get promoted to La Liga, when he managed to score 18 goals and provided nine assists in 36 Segunda Division matches.
His exploits have attracted the interest of several teams as revealed by the administrator, who insists if Sadiq is sold then it must be at the right price.

“Right now there are three teams that are fighting for him, but he will be sold; if he is to be sold, [it will be] at the price that we understand,” El Assy said as quoted by Jornada Perfecta.

“There are two teams from Spain and one from abroad, but I cannot say who are competing to take Sadiq.”

The 39-year-old has further stated they are open to keeping the 25-year-old but it will depend on the outcome of the negotiations.

“We want him [to stay], yes, but we are prepared for both scenarios, if he leaves or if he finally stays, so there is a possibility that he will stay,” he added.

“Everything will depend on the negotiations.”

Villarreal are believed to be one of the teams chasing Sadiq but in a recent interview, La Liga ambassador Mutiu Adepoju explained why the forward should not consider a move to the Yellow Submarine.

“When a player is having teams looking for him, that means such a player is doing very well and getting things right,” Adepoju told GOAL.

“However, he would need to stay one more year or so before going to Villarreal or any other team.

“Going to Villarreal now would mean that he would be going there to compete against already established players there. He will need to work extra hard to become noticed or to become a regular.

“On the contrary, in Almeria, they already know him having played a key role in the squad that got them promoted to La Liga. There, he is certain of getting regular playing time and that would save him some stress.

“All the same, I don’t have any problem with him on any of his choices as long as he stays in the Spanish league.”

Sadiq joined AS Roma in 2016 and following his failure to get first-team action, and was loaned to Bologna, Torino, NAC Breda, Rangers, Perugia, and Partizan. He joined Almeria on October 5, 2020, on a five-year contract.
(Goal)