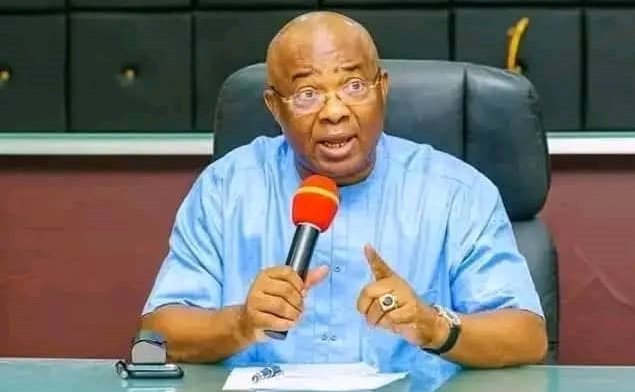 Imo State Governor, Hope Uzodimma has said Jobs exceeding 300,000 awaits youths in the State in no distant time even as machinery is put in motion to tap into the global benefits of Digital Economy.

He made the disclosure at the Imo State Executive Council Meeting held on Wednesday.

A Council Memo on Imo Youth Digital Training and Empowerment Scheme as submitted by the Chief Economic Adviser to the Governor, Prof. Kenneth Amaeshi was approved.

The Chief Press Secretary and Media Adviser to the Governor, Oguwike Nwachuku in a statement said while addressing newsmen at the end of the Council meeting, the Chief Political Adviser and Head Political Bureau, Barr. Enyinna Onuegbu, revealed that the Memo was brought to the Exco by Prof. Amaeshi in conjunction with the Commissioner for Labor, Employment and Productivity, Chief Ford Ozumba.

Enyinna Onuegbu according to the statement said: “The objective of scheme is to have about 300,000 Imo youths pass through a training that will make them digitally sound and guarantee their expertise in digital technology and other training possibilities.”

“In addition, the training will increase their qualifications, by guaranteeing their knowledge as they will become employable as well as employers of labor.”

Flanked by the Commissioner for Labor, Employment and Productivity, Ford Ozumba, newly sworn-in Commissioner, Jerry Egemba and the Chief Economic Adviser to the Governor, Prof. Amaeshi, Onuegbu noted that the State Government is planning a digital training program for thousands of youths in Imo State to be held soon, and that the Exco constituted an Inter-Ministerial Committee to drive the project.

Other members are: the Commissioner for Youths and Sports and the Chief Political Adviser and Head of Political Bureau.

The EXCO further mandated the Committee to work out the framework – modalities, logistics, and time-frame and expenditure profile for the project.

The Chief Political Adviser in his contribution said: “The project when realized will be very beneficial to the teaming Imo youths, especially those who are likely to benefit from it not only as employees but will turn out to be employers of labor.

“The beneficiaries will contribute to the economy of Imo State as they will be working for International organizations while living in Imo State and paying their taxes and bills.”

He explained that the Governor assured the Exco that well established entrepreneurs and computer gurus such as Zinox Computers and the Federal Minister of Communication and Digital Economy have all already keyed into in the training project of Imo youths as far as the digital world economy is concerned.