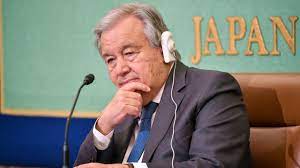 The UN and Turkey helped broker the only diplomatic breakthrough in this war so far – a deal that allowed Ukraine to resume its exports after a months-long Russian blockade that led to a global food crisis.

Antonio Guterres, the UN Secretary General, was personally involved in the negotiations; Turkey is hosting the center that co-ordinates the deal, including with inspections of ships.

It’s a delicate arrangement. After meeting the Ukrainian and Turkish presidents, Guterres urged all sides to continue working “in good faith” for the deal to hold.

President Erdogan of Turkey said the grain deal could form the basis for peace talks between Ukraine and Russia. But few share the enthusiasm. President Zelensky said negotiations can only start after Russia leaves territory it invaded.

Their talks in Lviv were overshadowed by the tensions around the Zaporizhzhia nuclear power plant, hundreds of miles away.

They all expressed concern that the military activity around the station could result in a catastrophe. There’s hope diplomacy can solve this crisis too, although there are no signs of it yet.
Employees of Zaporizhzhia nuclear power plant have said they are “powerless” in the face of “human irresponsibility and madness”.

They’ve warned of a potential nuclear catastrophe at the facility, saying in the past two weeks it has become “the target of continuous military attacks”.

“Artillery strikes are becoming more and more powerful and dangerous every time,” they say.

The plant, the largest in Europe, has been occupied by Russian forces since March, though its Ukrainian staff have continued with daily operations. The message from the workers does not name either Russia or Ukraine, which have both blamed each other for shelling near the plant.

Some of the facility’s 10,000 staff are being injured or killed at work, they add, in the appeal published on the Telegram messaging app.

“Stop and think!… What is happening is horrific and beyond common sense and morality,” they write, warning that an accident could be worse than the nuclear disasters at Chernobyl and Fukushima.

“We know how to professionally manage a nuclear reaction, but are powerless before human irresponsibility and madness,” they say.
Ukraine’s main intelligence agency has accused Russia of planning to stage a “provocation” at the Zaporizhzhia power plant.

Moscow wants to “raise the stakes”, a Telegram post from the agency alleges. It claims that Russia is planning a terrorist attack at the site which will be blamed on Kyiv.

The plant, the largest in Europe, has been under Russian control since March.

The post says that representatives from the Rosatom, the Russian state nuclear corporation, had suddenly left the site.

Earlier, Russia made its own accusation that Kyiv was plotting an incident which it could blame on Moscow.
We’ve been hearing Turkey’s President Recep Erodgan and UN chief Antonio Guterres warn about the dangers of the situation at the Zaporizhzhia nuclear plant.

Officials here claim Russia is creating this crisis to try to force Ukraine and other countries to comply with their conditions.

Ukraine says Russia has deployed around 500 forces to the complex, who are using it as a shield to launch attacks against Ukrainian towns.

Russia, on the other hand, denies the accusations, and says its troops are, in fact, protecting the plant.
For days, Russia and Ukraine have accused each other of shelling near the site, fueling fears of a nuclear catastrophe. It’s hard to independently verify the allegations, as the plant is off limits.

The facility has been under Russian occupation since early March, although Ukrainian technicians still operate it.

They’re working under pressure, and there are claims some have been detained, tortured and beaten.
(BBC)