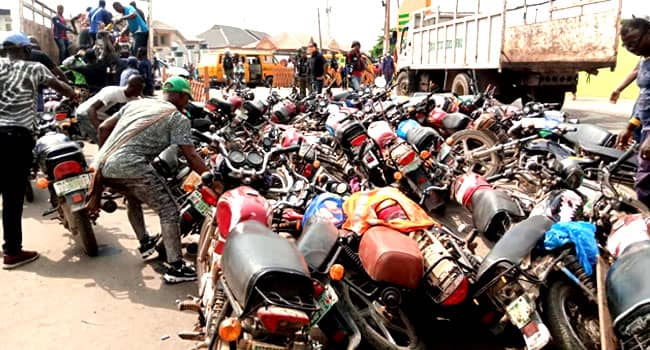 The Lagos State Government has extended the ban on commercial motorcycles, better known as Okada, to four more council areas.

According to a Channels TV report, the Transportation Commissioner, Frederic Oladeinde, made the disclosure on Thursday during a briefing in Lagos.

He said the move followed a review of the impact of a similar ban in six local government areas.

The commissioner assured Lagosians that the government has put measures in place to cushion the impact of the most recent ban on Okada in the commercial city, reiterating that the move is in the best interest of residents.

“This decision is to further consolidate on the achievements made so far with particular reference to decline in accident and crime rate as well as to continue to bring sanity to our communities within the State.

“While the ban is in force, the public is advised to resort to alternative and sustainable means of transportation provided in the State such as the First and Last Mile Transport Scheme, the BRT Scheme, the Lagos e-hailing taxi Scheme (Lagride). And other acceptable modes of transportation to go about their daily activities.

“The State Government has directed the Nigeria Police Force, and the Lagos Command with all relevant stakeholders (Army, Navy, Air Force, other security and law enforcement formations within the State) to be complimented by the ‘Anti-Okada Squad’ that will be deployed to these new locations in a bid to stimulate seamless implementation and enforcement of the phase two ban in the State, the commissioner said.