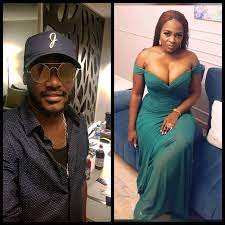 Nigerian music star 2Face Idibia has celebrated one of his baby mamas, Pero Adeniyi on her birthday.
The music icon took to his Instagram Stories on Thursday, August 18, 2022, where he celebrated the mother of three of his children.
“Birthday blessing @perosaiyemi. More light, strength, wisdom and jah protection,” he wrote.
Happy birthday to Pero from all of us at Pulse.

Pero is one of the music star’s baby mama. Idibia and Pero have three children, Ehi, Justin and Innocent.

In 2021, Pero made the headlines after she was named the third wheel in the music star’s marriage.

In September 2021, Annie Idibia called out her husband over his ‘suspicious’ relationship with Pero.

She also accused his family of not loving and caring about her since their marriage.
A few weeks later a leaked audio taping of the movie star surfaced where she threatened fire and brimstone.

2Face later released a statement asking the public to back off his marital issues.

Annie was further accused of engaging in “malicious and libellous online publication” which subjected Pero and her kids to online harassment and bullying.
(Pulse)