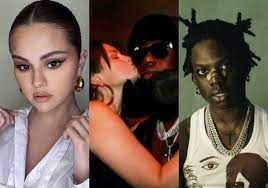 American singer, Selena Gomez, and Nigerian Afrobeats star, Rema, have sparked a stir with a video of themselves cozying up in each other’s arms.
Just recently, Rema stunned his fans as he undoubtedly lived up to their expectations after his sold-out Rave & Roses US tour in Los Angeles, turned out to be a huge success.

Surprisingly, in a video that surfaced online, Canadian singer Justin Bieber’s ex-lover, Selena Gomez was captured hugging and kissing the ‘Calm Down’ crooner backstage after the sold out event.

American Rapper and Singer, 6lack was also spotted with Rema at the backstage.

The Mavin star took to his Instagram page and shared moments from the sold-out show.

The viral video with Selena Gomez stunned many of his fans who commended him for showcasing his diverse range on international stage.
(Gistlover)