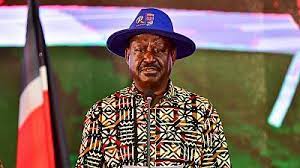 Kenyan opposition figure Raila Odinga said he would challenge the results of the close presidential election with “all legal options” after Deputy President William Ruto was declared the winner.
“What we saw yesterday is a travesty and a blatant disregard of the Constitution,” Raila Odinga said.

“We will pursue all legal and constitutional options available to us. We will do so in view of the many flaws in the elections,” he said, in his first address since the results were announced the day before.

The announcement brings further uncertainty to a country where last Tuesday’s poll was widely regarded as the most peaceful.
East Africa’s most stable democracy now faces weeks of challenges and the possibility that the Supreme Court will order a new election.
Already, religious and other leaders have called for calm in a country that has already seen deadly post-election violence.

It was Raila Odinga’s first appearance since the chairman of Kenya’s electoral commission on Monday declared William Ruto the winner with nearly 50.5 percent of the vote.
Four of the seven commissioners abruptly announced that they could not support the results, without giving details, and Raila Odinga’s supporters clashed with the remaining commissioners at the venue.

Shortly before Riala Odinga spoke, the four commissioners claimed that the president’s final calculation was 100.01% and that the excess votes would have made a “significant difference”.
They also said that he did not give them the opportunity to discuss the results before his statement.
(Africanews)