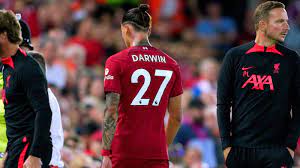 Darwin Nunez was sent off on his first Premier League start as Liverpool were held to a 1-1 draw by Crystal Palace at Anfield.

The Uruguayan was shown a straight red card after shoving his head into Joachim Andersen, the Palace defender, following a clash 12 minutes into the second half.

Liverpool trailed 1-0 at the time, Wilfried Zaha having given the visitors the lead with a clinical finish from Eberechi Eze’s superb pass after 32 minutes.
But Jurgen Klopp’s side rallied with 10 men and levelled when Luis Diaz cut inside to lash an unstoppable 25-yard strike home in front of the Kop.

Liverpool pushed for a winner, but it was Palace who came closest when Zaha hit the post sliding in to meet Odsonne Edouard’s cross.

The result means Klopp’s men have now failed to win their first two games of the campaign for the first time since 2012-13, and they head to Old Trafford next to face Manchester United.
The Winners
Luis Diaz

Talk about stepping up in the hour of need. Liverpool were in danger of collapsing completely, 1-0 down and reduced to 10 men after Nunez’s moment of madness. How would they respond?

The answer was provided by Diaz, who collected the ball on the left and danced his way between three Palace defenders, then cut inside another before smashing a quite brilliant 25-yard strike past Vicente Guaita.

It was a moment of pure brilliance from the Colombian, and it ignited the crowd, who had been stunned by Nunez’s dismissal and their side’s low-key start to the second half. Diaz is a winner, and his attitude makes him an ideal player for this Liverpool side.

They needed all of his spirit and belief here.

The best player on the field was wearing white. Eze put in an outstanding display as Palace left with a point and nearly headed home with three.

His slide-rule pass created the Eagles’ goal for Zaha, and his ability to evade challenges allowed him to glide through midfield and threaten Liverpool’s backline throughout.

Having seen last season ruined by injury, this is a big campaign for the 24-year-old, and he looks ready to seize his opportunity.

Well, at least they’ll be getting paid plenty of overtime at the moment. We can add Joel Matip and Roberto Firmino to a lengthening absentee list, and Joe Gomez wasn’t deemed fit enough to start the game either.

A boost is badly needed, whether from Matip or Firmino, Diogo Jota or Ibrahima Konate or Thiago Alcantara.

At least they have a full week before their next game, against Manchester United.
The Losers
Darwin Nunez

With Liverpool 1-0 down, Anfield edgy and cool heads needed, Nunez did exactly what his side didn’t need him to do. He reacted to a bit of provocation from Joachim Andersen and left the Palace defender in a heap.

Paul Tierney had no hesitation in showing the red card, and Nunez had to be escorted from the field by James Milner.

It cost his side here, and it will cost them in the coming weeks. There will be no Nunez at Old Trafford next week, nor against Bournemouth or Newcastle after that. With resources already stretched, Klopp could well have done without a moment of sheer stupidity from his new big-money centre-forward.

Hopes for a title race

Two games in, four points dropped. It feels almost absurd to say, but that looks a long way back, given the standards set at the top of the Premier League in recent years. More worrying, however, is the fact that Liverpool don’t look anything like the team we’ve become so used to seeing, and the fact their injury list is longer than any other side in the league. Without the likes of Thiago Alcantara, Diogo Jota, Joel Matip and Ibrahima Konate, they are a far weaker proposition – and Manchester City will be delighted by what they’ve seen so far.

How’s your luck? Having waited so long for an opportunity to play centre-back in the Premier League, Gomez’s chance looked to have arrived when both Ibrahima Konate and Joel Matip were struck down with ill-timed injuries.

But a training-ground knock meant Gomez was deemed fit enough only for the bench, and Nat Phillips got the nod instead.

Costly for the England international, and for Liverpool too perhaps. A fit Gomez would certainly have been more useful against Palace’s counter-attacking threat, as he showed after replacing Phillips in the second half here.
(Goal)