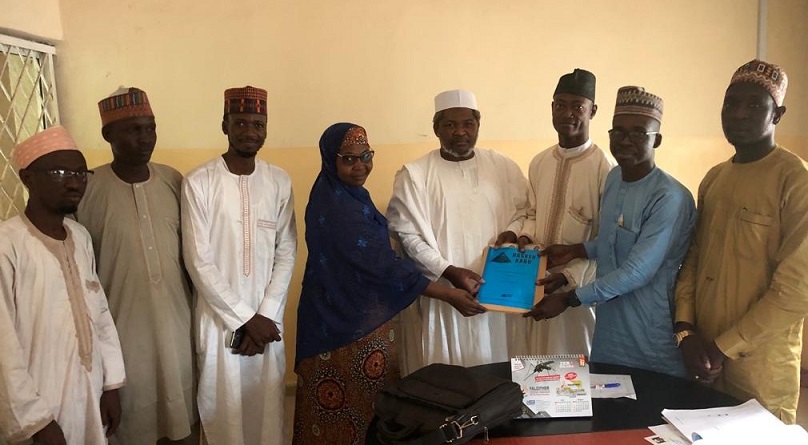 He made the commitment when the Charter was officially presented to him in his office on Monday by Members of Hasken Kano Platform.

Stallion Times reports that the group unveiled and disseminated the Citizens’ Charter of Demand to politicians, civil society organizations, traditional and religious leaders, women and youth groups, and other stakeholders in a grand event last Wednesday.

The objective of presenting the Charter to the ADC candidate was for him to uptake and mainstream it in his campaign engagements, and to make commitments to its implementation, if elected.

H.E Mallam Khalil shared with Hasken Kano team a summary of his campaign manifestoes and aspirations for Kano State.

He said, his core values among others include fairness, equity and justice, good leadership, unity and solidarity, and diligence.

The ADC gubernatorial candidate promised to mainstream the content of the Hasken Kano document in his campaign engagements.

H.E Mallam Khalil also committed to granting a quarterly audience to the platform as a follow-up for the implementation of the charter, if successfully elected into office.

However, he recommended that the Charter be translated into Hausa as a way of honoring the language and culture of the people of the state.

“This will make the people in the state have a proper understanding of the situation at hand, and facilitate ownership at the grassroots level,” he added.

The ADC gubernatorial candidate graciously signed the document, saying: “To show you I am committed to the Charter.’’

Earlier, in his presentation, the Coordinator, Sulaiman Umar Isma’il explained the process that led to the development, and production of the Charter.

According to him, over 60 citizens’ groups were identified and engaged in a series of meetings on key issues across Education, Health, Environment, Justice, Women and PWD, Commerce (Internally Generated Revenue), and Digital Economy.

“During those processes, relevant stakeholders were mapped in categories based on their influence and interest in pushing for reforms in the state.

“Major players in the political space were also identified including political parties, and their likely contestants, aspirants, and candidates in the upcoming 2023 general election,” he added.

Hasken is looking to translate, produce, and share the Citizens’ Demand Charter with other gubernatorial candidates in the state.