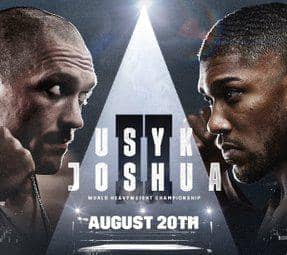 The match will be the most expensive price Sky have ever placed a pay-per-view at, £27, in order to watch the world title super-fight. Meanwhile, fans in America will get the bout as part of their DAZN subscription, which is just $20, or around £17.

The day will feature 11 fights including the main event, which means they are in for a long night of action. The major names, including Ramla Ali in a history-making women’s bout, a world heavyweight title eliminator between Filip Hrgovic and Zhilei Zhang, and Callum Smith’s return against Mathieu Bauderlique. Also involved is former world champion Badou Jack, facing Richard Rivera in his latest Middle Eastern outing.

Anthony Joshua is looking a lot leaner than usual ahead of the Oleksandr Usyk rematch this weekend! If Joshua wins, he will be joining the likes of Michael Moorer, Evander Holyfield, Lennox Lewis, Vitali Klitschko and Ruslan Chagaev who became the title winner on three occasions. Four boxers have regained the heavyweight title in an immediate rematch, Floyd Patterson in 1960, Muhammad Ali in 1978, Lennox Lewis in 2001, and Anthony Joshua in 2019.

Joshua’s lack of speed could end up being his undoing in his rematch with Oleksandr Usyk. It’s gonna be hard to beat Usyk because he’s fast and a puncher. Joshua would have to put a lot of pressure on Usyk and keep it on him all night. Despite Usyk powerful punching, he’s not as accurate. Unlike the first time he must not try to outbox Usyk, he should rather go for the knockout this time.

He would have to get up close and personal and make it difficult for Usyk if he must win this fight.However, Usyk is considered by many to be the favourite but at that weight class, it’s near-enough impossible to accurately predict what’s going to happen when there are so many factors to consider. The Ukrainian looks massive in recent footage from camp and it certainly looks like he’ll be causing AJ huge problems.

The following are the features for the months of August and September: