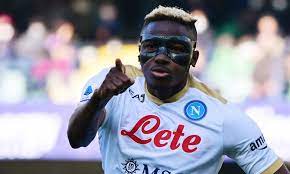 Victor Osimhen scored his first goal of the 2022-23 Serie A season as Napoli lead Hellas Verona 2-1 in Monday’s fixture.

The Nigeria international was named in the Blues’ starting XI alongside Khvicha Kvaratskhelia and Hirving Lozano in the attack.

However, it was the hosts who took a 29th-minute lead through Kevin Lasagna’s effort from an assist by Koray Gunter.
Before the applause from the jubilant home fans died down at the Stadio Marcantonio Bentegodi, Napoli levelled matters thanks to Kvaratskhelia.

And with the first half looking to end 1-1, Osimhen put Luciano Spalletti’s men after tucking past goalkeeper Lorenzo Montipo from a close range.
(Goal)