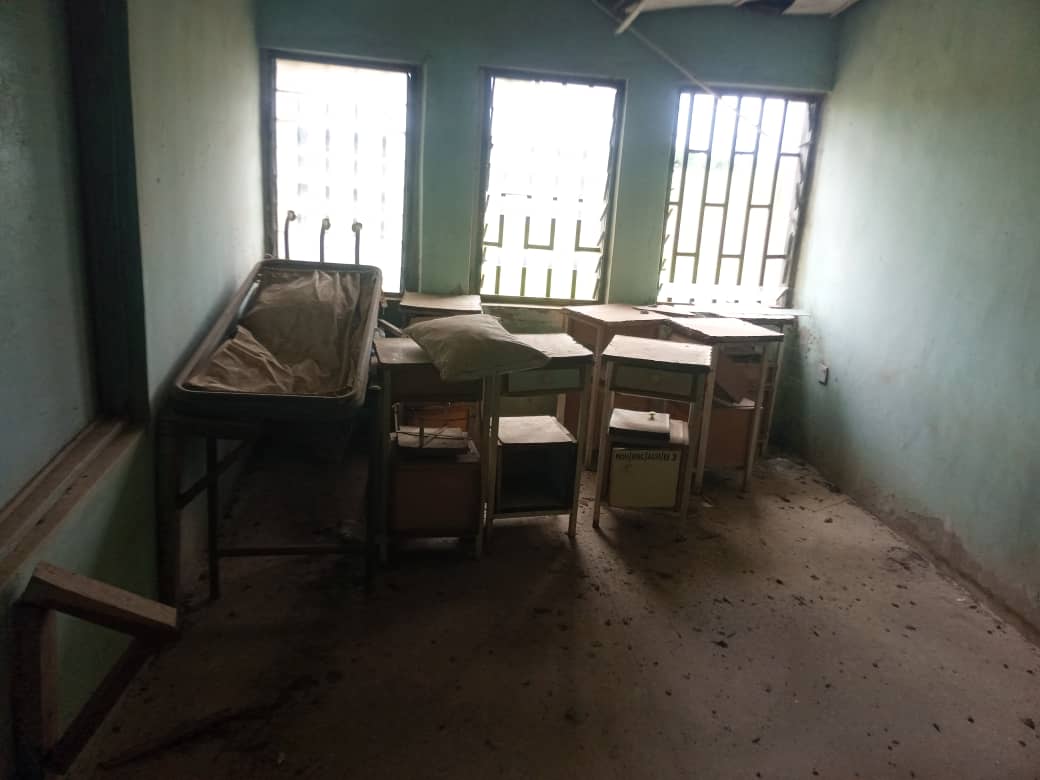 Agbaja Cottage Hospital, under the Lokoja Local Government Area of Kogi State, is still in a dilapidated form despite the release of funds for the rehabilitation of the hospital.

Wadata Media and Advocacy Centre, (WAMAC) in a recent investigation aired on Grace 95.5FM Lokoja, and monitored by Stallion Times unraveled that the Kogi State Government awarded a contract for the renovation of Agbaja Cottage Hospital, funds were released, but little or nothing was done to give the hospital a facelift.

Agbaja, headquarter of Oworo land is a stone’s throw from Lokoja, the Kogi state capital. It has been in existence since the 17th century.

The agrarian community has attracted little attention from the government for decades despite its abundant mineral resources such as iron ore and many more.

Agbaja Cottage hospital which was established by the then Kwara state government before it was handed over to Kogi State when the state was created in 1991.

The hospital was meant to provide health services to the entire Oworo land, unfortunately, the Agbaja cottage hospital has been in a dilapidated form.

It is on record that due to the bad state of Agbaja road and Agbaja cottage hospital, the community has recorded a high mortality rate since it is always difficult to transport an emergency patient from the community to Lokoja, the Kogi State capital.

His words, “I am a victim of this ugly development. I lost my brother recently simply because there is no good hospital here and while we were taking him to Lokoja, he died on the way. Agbaja community has recorded a high mortality rate.

“Some of our Women lost their lives while trying to give birth while others also lost their babies which is not supposed to be so”.

When Wadata investigative media visited Agbaja Cottage hospital, it was discovered that the hospital is not habitable, lacks equipment and one staff was on ground out of over 32 staff that is under the payroll of the Kogi State Government.

It was gathered that most of them have absconded from their duties but still receive salary on monthly basis from the Kogi State Government.

“That cottage hospital belongs to Oworo land since the headquarter is here that is why it was located here. Presently, there are over 32 staff with three Nurses and no Doctor. We have been reporting this to the ministry of health about this sad development. There was a time we invited all the staff of the hospital to come so that we will have a community meeting.

“They were all here with us and they pledged their loyalty. But that loyalty didn’t see the light of the day. some of them come once in a week while others don’t come at all. Others also have absconded and relocated to other Lokoja. The hospital was awarded to a contractor, but if you go there, Agbaja Cottage hospital is a shadow of its self” the Maasi of Agbaja HRH Abubakar Isa Alugbere said.

An investigation by Wadata media revealed that the Kogi State Government through the State Ministry of Works, under the then Permanent Secretary, Dr J.B. Achegbulu awarded a contract for the rehabilitation of Agbaja Cottage Hospital on 4th March 2009.

The sum of Eight Million, four hundred and fifty-four thousand, five hundred- and twenty-five-naira, ten kobo, (N, 8,454,525.10) was awarded for the rehabilitation of Agbaja Cottage Hospital. The contract was awarded to an indigene of Agbaja community Mohammed Shaibu.

Wadata investigative media gathered that on the 24th April, 2009, the sum of N2,206,631.04 bank cheque was issued to the contractor Mohammed Shaibu from Kogi State Sub-treasury account for the project.

Also, on 3rd August, 2009, the sum of One Million, four hundred and seventy-one thousand, eight hundred- and seven-naira, thirty-seven kobo, (N1,471,087.37) from Kogi State Sub-treasury account was paid to the contractor Muhammed Shaibu. Within this period, a total of N3.6million has so far has been released for the renovation of Agbaja cottage hospital.

According the agreement signed in 2009 it was expected that the contractor will remove the badly damaged and leaking asbestos roofing sheets, and replace with 0.45 stuco long span aluminum roofing sheet, change all the wood that has been destroyed by termite, treat all the wood properly and increase the height of king post to 2.1m, remove damage ceiling board and replace 100% with asbestos ceiling board.

Also, the contractor was expected to remove and replace ceiling wood, treat properly with anti-termite solution, paint wall as specified by Architect after all the doors and windows must have been fixed, change all window frame to metal, change all door (frame and shutter) to steel door and coat all medal steel frame with gloss paint.

Looking at what was spelt out in the contract agreement and the work done on Agbaja Cottage hospital, it appears as if little or nothing was done to give Agbaja Cottage Hospital a face lift.

Wadata media gathered that, out of N3.6million released for the rehabilitation of Agbaja Cottage hospital, over N1milllion was allegedly given to some individuals as their own share thereby stalling the work.

While confirming Wadata media investigation, the Contractor Muhammed Shaibu alleged that some youths in the community forced him to give out part of the money as they claim it was a national cake and should be shared among themselves.

Wadata media visited the Kogi State ministry of work to ascertain if more money was released for the renovation of Agbaja Cottage hospital but it never yielded result. Some of officials of the ministry said they are not authorized to talk to us but referred us to the Commissioner who is not on sit.

A source in the Kogi State hospital management board confirmed further that more than 30 staff of Agbaja cottage hospital even though not functioning are under the pay roll of the kogi state government.

But the Kogi State Commissioner, Independent Corrupt Practices and other Related Offences, Okolo Ulu in a chat with wadata media said the commission will investigate the matter.